On Wednesday, December 11th. all one hundred and eighty Year 3 and 4 pupils, dressed in Christmas jumpers and sporting antlers, Christmas hats and lots of glitter, performed their amazing Christmas assembly to delighted parents, carers, grandparents and invited guests. 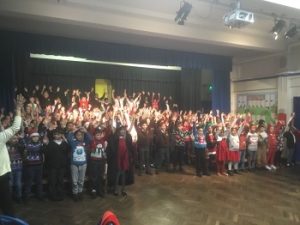 The production, directed by Mr G McEnoy with choreography by Miss B Mackerness, was an original interpretation of The Wizard of Oz and opened with a rousing performance of The Greatest Show. There were nine shouts of Woah! accompanied with synchronised foot stamping and arm waving actions and followed by the announcement: “Ladies and gents, this is the moment you’ve waited for!” The audience was certainly made ready for the journey on which they were about to join the performers.

A pupil gave a brief background to the original children’s fantasy novel written in 1900, The Wonderful Wizard of Oz, which was followed in 1939 by the musical featuring Judy Garland. Much to the amusement of the audience, he cheekily commented that it was “even older than Mr McEnoy!”

Next Dorothy and Toto are whisked away from their home in Kansas by a tornado to the magical land of Oz. The story is continued by the singing of the well-known songs, Follow the Yellow Brick Road and We’re off to see the Wizard which indicates their arrival in the Emerald City. 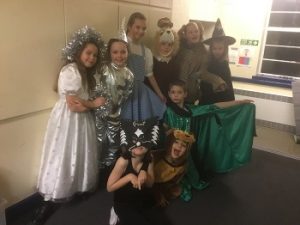 Dorothy,Toto and characters from The Wizard of Oz

Along her way Dorothy, played by Anna, meets Scarecrow, Tin Man and Lion who all need help from the Wizard to make them whole. However, the Wicked Witch of the West stands in their way. At this point the cast perform more songs from the original musical including Wake up, the Wicked Witch is there. In order to secure the help of the Wizard they have to take him the witch’s broom. The witch appears to loud boos from the audience and is eventually melted away. At last Scarecrow has a brain Tin Man has a heart, Lion has courage and Dorothy and Toto return home to Kansas.

The finale included a reprise of This is the Greatest Show, a beautifully emotional rendition of A Million Dreams  and a lively performance of Rocking Around the Christmas Tree.

One performance that remains in the memory is that of Toto, who when on stage, proved how agile he was at rolling down steps and running away from Lion much to the amusement of the audience.

Mrs Kate Needs, Headteacher, congratulated the pupils on a superbly entertaining show and thanked Mr McEnoy, Miss Mackerness and all staff involved for their hard work in preparing the performance.