You are here: Home › About Ruislip 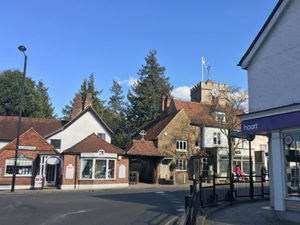 Ruislip is a town in the north west corner of Greater London on the River Pinn (the very small River Pinn). It has a population of just over 30,000.

Some of the buildings are ancient (13th Century) but most of the town was built as part of the ‘MetroLand’ developments of the early 20th Century. Ruislip’s Metropolitan Railway station opened in 1904, connecting the former village directly to Uxbridge, Harrow and Central London.

The area surrounding the station (and later the other stations at Eastcote, Ruislip Manor, West Ruislip and Ruislip Gardens) was developed as suburban housing. Fortunately the full town plan was never realised and the ancient woods of Ruislip were saved. Part of them is now a national nature reserve.

You can find out more about the town and the services for its citizens in this section:

We hope to expand this area in the near future, but would welcome any ideas as to what you think we should be covering.*