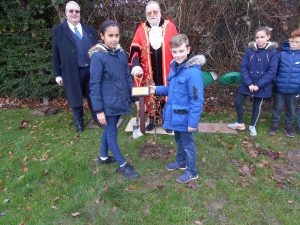 Local people may be aware that Ruislip Residents’ Association celebrated its centenary in 2019. As part of its celebration it was decided that the Association would plant one hundred trees in Ruislip and Ruislip Manor. Our local schools were asked if they would agree to have a tree planted on their site as part of the celebrations; every school readily agreed which was fantastic but not surprising as the Association enjoys excellent links with its local school community.

It was decided that oak saplings would be most appropriate as the oak tree features on the Ruislip/Northwood Shield. We were fortunate that a number of saplings have grown in Park Wood due to the industry of squirrels and jays who buried acorns to boost their winter larders. The Woodlands Committee Member, Graeme Shaw, will organise the transplanting of these saplings and prepare the ground on school sites to receive them.

The Association was delighted that the first of the proposed one hundred trees was planted in the grounds of Lady Bankes Junior School on Tuesday, December 17th in a ceremony attended by the Mayor of Hillingdon, Councillor David Yarrow and the Mayoress Mary O’Connor MBE.

Although for several days before the weather had been very wet, on the morning of Tuesday, December 17th. it remained dry for the ceremony,much to the relief of the organisers and visitors. The group assembled on the quite muddy school playing field included Mrs Kate Needs, Headteacher, Mrs Sue Dyer, Infants Headteacher, Graham Bartram, Chairman of RRA, Brian Cowley, President of RRA, Joan Davis, Vice President of RRA, Dr Charlotte Moore, Chair of Governors and, most importantly, pupil representatives from the School Council and House Captains. 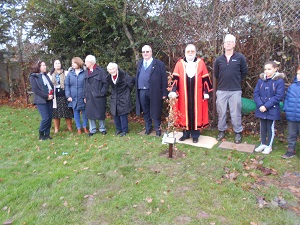 Everyone was welcomed by Sue Midgley, Education Committee Member, who referred to the work of the Association in supporting the community over the past hundred years, thanked the school for agreeing to have a tree planted. Graham Bartram then invited the Mayor to “plant” the oak sapling in the style of Her Majesty the Queen by adding a few spadefuls of soil to the previously placed sapling. A plaque commemorating the event was planted by two pupils. Graeme Shaw spoke to the pupils about the care of the tree, commenting that it would still be growing for many years to come, long after they had left school and become adults. He hoped that the pupils would let the Association know when they see the first buds appear in the Spring.

Now is the appropriate time to transplant the saplings as they are dormant and the Association will be planting a tree a week in the coming weeks. The next planting is scheduled to be on Friday, January 24th at Sacred Heart RC Primary School.