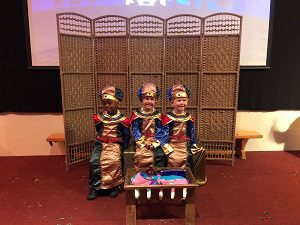 On Thursday, December 20th Rainbows Class, a class of three year old children, performed their delightful Christmas Poem. The Poem, read beautifully by Mrs Michael, Nursery Teacher, tells the story of the first Christmas. The children acted out the parts of the story from the announcement to Mary that she was to give birth to a baby called Jesus, the Son of God, the journey to Bethlehem, the birth in the stable surrounded by animals, the arrival of the shepherds and finally the three kings with their gifts.

The show contained many of the well known Christmas carols and songs which the children sang enthusiastically; it was amazing to see that children so young knew all the words. When the various animals appeared the children had great fun  during their songs making the relevant noises much to the amusement of the audience. When the whole story had been told, all the children sang We Wish You A Merry Christmas, the words of which they also signed.

The costumes were amazingly colourful, especially those of the three kings; however Mary and Joseph,the angels, the shepherds and all the animals had fantastic costumes which made this show something very special. However, the most special thing of all was the children.

When the show closed, Mrs Gill Westbrook, Headteacher, congratulated the children and teachers. She also mentioned that there was a retiring collection for the school’s charity of the year – Trinity which supports homeless people. It was also interesting to learn that a group of Year 6 pupils had been to London to deliver hats, gloves, scarves and other warm clothing to those sleeping rough. These items were donated by parents or bought with money donated. What a great way for children to celebrate the true meaning of Christmas!