The Nursery Christmas Show was held in the Nursery Classroom which had been rearranged with a stage and seating for the audience. Mrs Cowley, Nursery Teacher, felt that this would be less daunting for the three year old children than performing on the stage of the school hall. As they entered some were pleased to see their mums, dads and grandparents and waved excitedly, a few others were overcome by the occasion but were supported by the kind, patient staff.

The show opened with the children saying: Welcome to our Christmas Show!  Different groups of children were carol singers, snowmen, reindeers and robins and sang appropriate songs to which they did appropriate actions. The Reindeers sang Jingle Bells whilst enthusiastically ringing their bells; the Robins sang Rocking Robin whilst flapping their wings and gyrating to the music. This was followed by Santa, his three helpers and a chimney whilst the children sang Santa Got Stuck up the Chimney much to the amusement of the audience.

Next there was the traditional Nativity Scene with Mary, Joseph, baby Jesus, a donkey, a sheep, kings, shepherds and angels who sang Twinkle, twinkle, little star. All the children,who were grouped round the manger, sang Away in a Manger. Finally all the children sang We Wish You a Merry Christmas.

The whole show was quite magical; it was difficult to believe that the performers were only three years old. It was a tribute to the dedication and patience of Mrs Cowley and her staff.

Reception Christmas Concert was held in the school hall on Tuesday, December 4th. in front of a large audience of parents, carers, grandparents and other visitors including school governors.

Each of the three classes had their own part to play in the Christmas story. Miss Lambie’s Class were the first to perform No Room, No Room and Born in a Barn with appropriate actions all the way through the songs. This was followed by Mrs Colaco’s & Mrs Bull’s Class who were dressed as stars which lit up in the dark which was very effective as they sang Big Star. The children wearing angels’ costumes sang Hey Shepherds which was a wake up call to the shepherds telling them that baby Jesus was born for them. The third class to perform was Mrs McCarter’s & Mrs McCarthy’s Class, some of whom were wearing lovely sheep costumes, as they progressed to Bethlehem singing. One of their lively songs was Calypso Kings to introduce the three kings bringing their gifts. Finally everyone had arrived at the stable and Everyone sang Rock the Heavens. Finally all the children faced the audience to sing We Wish You A Merry Christmas.

This was another very entertaining show which was only possible due to all the hard work of all the staff concerned. 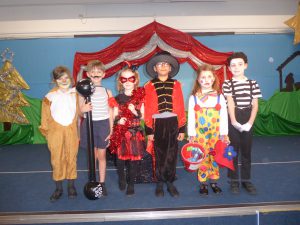 The Greatest Show by Years 1 & 2 was aptly named as the narrators of this show were Ringmaster, Strongman, Lion, Clown, Acrobat and Mime Artist who very effectively introduced the different parts of the show. Mrs Page’s & Mrs Murray’s Class numbers from some of Andrew Lloyd Webber’s musicals including Cats and Joseph. Whilst singing the cats moved to the music swinging their tails. Mrs Rowland’s Class chose Walt Disney as their theme, singing songs from Mulan and Jungle Book. Miss Abbott’s Class’ took their inspiration from stories by Roald Dahl such as Charlie and the Chocolate Factory. The children’s curly green wigs were a favourite with the audience! Mr Milner’s Class performance was called The Queen and was introduced by Mr Milner sporting a mask of Her Majesty doing the hoovering to the sounds of I Want To Break Free. The class finally performed Dancing Queen and they certainly had all the moves!! Miss Surey’s Class were dressed as spacemen for their performance which began with Star Man and was followed by Walking On The Moon. The choreography was fantastic! Julie Andrews was the theme for Miss Fraser’s Class who sang Let’s Go Fly A Kite, ending with a wonderful rendition of Supercalafragilistic. All the girls performed with brightly coloured umbrellas and both they and the boys danced with tremendous enthusiasm and enjoyment.

The show’s Finale involved all the pupils depicting a traditional Nativity Scene in the stable in Bethlehem. The whole performance was truly a “Great Show”. Once again the success of such a show was down to the hard work and ingenuity of all the staff involved. It certainly put everyone in the audience in the Christmas mood!