The school’s Year 3 pupils (aged 7 & 8 years)  presented their Production entitled The Vikings in the school hall on Friday, February 9th. The pupils have been learning about the Vikings this half term and had been rehearsing for their production for only three weeks.

A Viking king, his two sons and two daughters were in the opening scene. The father tells his sons that the night had come for them to finally go a-Viking. They are excited but the daughters bemoan the fact they are girls who have to stay at home. Their destination is across the sea  to a monastery on  Lindisfarne.  The monks will be easy to overcome for the Vikings when they set foot on dry land. The father and his sons join the Viking ship while the daughters join the group of Viking women at the side of the stage to wave the men off on their voyage. The Viking raiders in their ship row rhythmically as they sing the song Dragon Ships. This was very effective and was greeted with applause from the audience.

The Viking raiders land on Lindisfarne to the sound of pupils playing drums and assume an aggressive position on one side of the stage while the monks huddle quivering centre stage. A fight ensues and the Vikings are victorious. A few surviving monks explain to the audience that it is AD793 and that there had been fore-warnings of the invasion to come. They also tell how the Vikings ransacked the monastery, pillaged their gold and silver and how two Brothers were bound with ropes and taken as slaves.

The king’s two sons recount the story of their homecoming with their loot, the great welcome they received and the feast they had at night by a fire to celebrate and listen to a Saga. The Saga Tellers relate the saga of Thor and how he overcame Thrym, the frost giant, with his mighty hammer. The pupils act out the scene as the story unfolds. The Viking men and women chant the chorus between the sections which ends with : Thor, Thor, god of war, god of storm and thunder. / Thor, Thor, god of war, he is a mighty wonder! which builds to an exciting crescendo.

Next we hear from the Viking women who tell how they joined their menfolk in the western lands for a new life that was better than the one they had in the cold Norse lands. They are not too happy that the men still go a-Viking and have all the fun while they stay at home and work hard. They sing Who’d Be A Viking Woman?

As well as being very entertaining the Production was also informative, often in a light-hearted way. It was also a good way of consolidating everything they had learned about the Vikings. The pupils were excellent and really seemed to enjoy their performance which they conveyed to the audience who rewarded them with warm applause at the end of the performance. 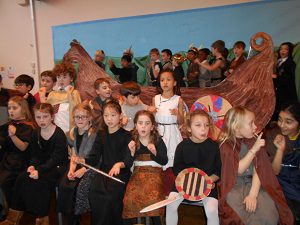 The Vikings in their Dragon Ship and the Viking women.

Special mention must go to Mrs Gerrard and Miss Patel, Year 3 class teachers, for their hard work preparing the children for this excellent show.