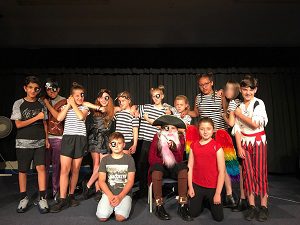 Captain Redbeard and crew of “The Curry Bean”

The Year 6 pupils presented their Production of Pirates of the Curry Bean on Wednesday 11th and Thursday 12th July. The show was full of fun and laughter from start to finish, the pupils delivering their witty lines with perfect timing, much to the delight of the audience.

The opening scene introduces the Periwinkle family: Pearl (mother) played by Eva, Jack played by Bradley, Liza played by Annabelle, Stanley ( father who is missing) played by Klea and Fiddlestick the cats played by JoJo and Maika. They discover an unknown treasure map. The pirates from the ship The Curry Bean somehow find out about the secret map and break into the family tavern and kidnap Pearl – they had also been instructed to bring “the bag” but had mistaken their orders!!

Next we meet Captain Cod of the ship SMS The Crunchy Frog played very confidently by Scarlett and Admiral Horatio Hornhonker played by Lola who was able to bring out all the humour in her portrayal of the character The Admiral has no idea about seafaring but as he puts it “Daddy is Commander in Chief.” Some members of the crew are less than capable for their roles: Lookout Lofty played by Valentina is short-sighted and the ship’s doctor Cutthroat Clegg played by Maja has no medical training and whose answer to any problem is to use the saw he wields! Before they set sail Captain Cod is approached by two health and safety officers, aptly named as Mr A Wally played by Harry C and Mr A Pratt played by David L, who inform him the ship needs to be insured. His reply is “I have insurance, I’m with The Admiral” (Ha! Ha!)

In exchange for passage on The Crunchy Frog, Jack and Liza Periwinkle bring aboard their rat catching cats. In return Captain Cod and the Admiral help them on their journey to find their mother and the missing map.

We meet pirate Captain Redbeard (whose beard is pink) played by Ruby. Mrs Periwinkle, who is imprisoned on The Curry Bean, agrees to be the ship’s on-board ship keeper.

Finally the Periwinkles are reunited with Mr Stanley Periwinkle, now known as Captain Swaggersword, who relates how he became a pirate; the treasure is found and shared equally among all the characters. 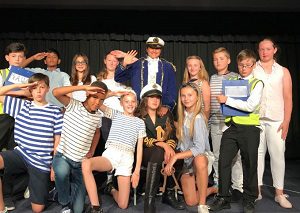 Captain Cod, Admiral Hornhonker and crew of “The Crunchy Frog”

The whole story moved with pace and included some lively songs. Mrs Kate Needs, Head Teacher, congratulated the pupils on their brilliant performance and thanked the Year 6 Staff Team for all their hard work in the preparation of such a fantastic Production.

However, the evening’s proceedings were not quite over. Mrs Needs invited the year group to sit at the front facing the stage. To everyone’s surprise a screen was lowered and a series of delightful pictures of the pupils in class groups and taking part in many activities – memories to treasure – which brought tears to many eyes. 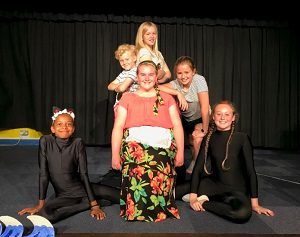 In September all the pupils will be starting at local secondary schools and we wish them all a happy and successful transition. *