You are here: Home › Primary › Education › Lady Bankes Junior School Choir Take Part In A Concert to Celebrate 100 years of the RAF
By Sue Midgley on 27th March 2018 in Primary, Education 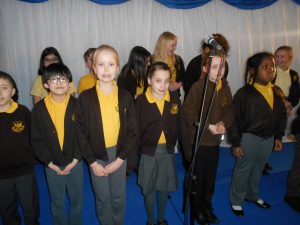 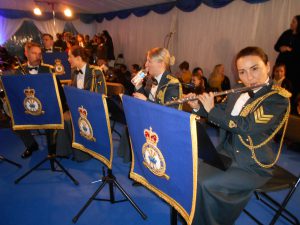 Members of the Central Band of the RAF

On Thursday, March 22nd. the Choir took part in a wonderful celebration of the centenary of the Royal Air Force in a large marquee in the grounds of The Battle of Britain Bunker, Uxbridge. Lady Bankes was one of four local primary school choirs who performed on the evening, together with the Junior singers from Hillingdon Music Hub. The singers were accompanied by musicians from the Central Band of the Royal Air Force who are now stationed at RAF Northolt.

The concert entitled Flying! an aero-dynamic cantata was presented by Hillingdon Council and commissioned by the Hillingdon Music Hub. The lyrics of the songs the choirs performed were written by Caroline Dooley and David Perkins ( who also wrote the music and played the piano). The concert opened with all the choirs performing Take Off which described the feeling of flying above the earth. Lady Bankes was the first choir to perform solo and sang Then You And I Could Fly. This described how humans, watching birds, bees, ducks and geese fly, thought that if they had wings what a wonderful thing that would be so they decided: Let’s try!

The cantata was a continuous performance telling the story from the days of  the early pioneers to modern day flights from Heathrow to countries and cities all over the world. The narrators, Caroline Dooley and Emily Thomas, led us through the journey from when the RAF was formed on April 1st 1918 and pilots flew to France to help the troops fighting in the trenches Flying High With Glory And Honour and their Finest Hour in The Battle Of Britain which ended with Winston Churchill’s famous words: Never in the field of human conflict was so much owed by so many to so few.

So many young pilots’ lives were lost in the two World Wars which was reflected in the very moving lyrics of We Will Remember Them which was one of the songs beautifully performed by all the choirs.

Finally, with reminders of the horror of wars in the past and the sacrifices made, we arrived at the modern world of flying with the two final performances of Heathrow and Landing.

The performance of the Lady Bankes Choir directed by Mrs Kate Needs, Headteacher, was outstanding. The pupils were totally engaged and were the only choir present who had learnt off by heart all the words of the songs they performed; indeed, they also knew the words of some of the other choirs’ songs as they could be seen singing along. Very impressive!!

This surely was an event that the pupils will look back on with pride. Well done !! 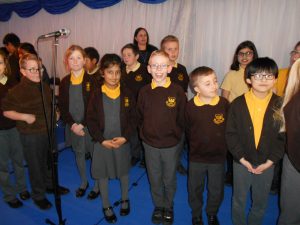