On Friday, March 23rd the school invited Night Owls to their morning assembly. Two members of staff from the company, based in Rayleigh, Essex, Erika Enright and Olivia Minot brought six owls to school so the children could learn about them, see them fly and get up  really close to an owl.

Before the assembly began the ladies brought in the owls and each one sat on a perch in front of the children. One of them, Monty, a baby Bengal eagle owl who was only eight weeks old, in many ways became the star of the show as he bobbed and twisted his head inquisitively from side to side while Olivia was talking to the pupils.

Night Owls obtain their owls from a breeder when they are three weeks old and gradually teach them to fly and become pupil friendly. Their work is solely to bring nature to schools. Staff have been visiting schools for the past twenty five years.

When the assembly began all the pupils were sitting very quietly and attentively listening to Olivia telling them about the different owls. She explained that an owl was a bird of prey who only eats meat (e.g. mice, voles etc.) and that they catch their prey with their feet which have long, sharp claws. The children were told that there were six different types of owls that live in our country; they have good eyesight and three dimensional hearing which helps them to pinpoint their prey; they can rotate their heads three quarters of the way round; they have very soft feathers which enables them to fly silently. 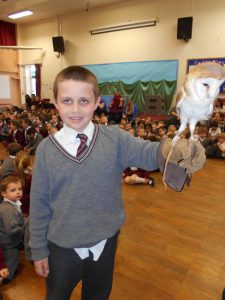 Pupil who had flown the barn owl 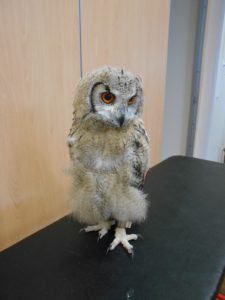 of Erika and Olivia who were positioned at different parts of the school hall. This was amazing and the children were asked to applaud the owls’ efforts which they did. Some pupils were given the opportunity to fly the owls which meant that every hand went up as the children were eager to participate. 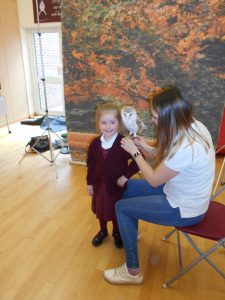 Pupil pictured with Whisper and Olivia

Finally every pupil from Reception to Year 6 was given the opportunity to have his/her photograph taken with Whisper, a delightful barn owl. A few pupils were a little apprehensive at first but eventually could not resist the charms of the owl’s soft feathers.

It was a memorable occasion for the pupils and staff who otherwise might never have the opportunity to see these lovely birds close up.