The school held their annual Prize Giving event on Thursday, June 14th. to celebrate students’ achievement for the academic year 2017 – 18. The evening began with a speech of welcome articulately delivered by two Year 10 students, James Betson and Rachel Oduntan. James also received the prize for ICT and Computing Years 7-10 and Rachel was awarded the prize for Sociology Years 7-10.

The prizes were presented by the Guest of Honour, Dr Krish Kandiah, the founding director of Home for Good, a charity seeking to make a difference in the lives of vulnerable children. Dr Kandiah is also an award winning author, an adopter, foster carer, activist for refugee settlement and a theologian who is much in demand as a speaker both nationally and internationally.

There were prizes awarded for a member of each form in the year groups, subject prizes from each Faculty and Special Prizes. The latter included the Jack Hughes Literacy Prize for supporting the Library which was awarded to Ella Comer 8R, who was described as: an avid reader who visits the library daily. The prize is named after a teacher of English and Deputy Head of Lower School from September 1977 until March 1984 when he tragically died. He encouraged all his pupils to read widely and was instrumental in setting up the “Buddy” reading scheme. Another prize in this category, the Jacob Sawyerr Prize for courage and determination, was awarded to Caitlyn-Rai Gallagher-Stevens 9R, who in the past year had suffered family tragedies but had carried herself throughout with dignity. The Prize is named after Jacob Sawyerr, a former Bishop Ramsey student, who suffered a brain haemorrhage whilst playing football in March 2014. In the last four years following such a sudden and devastating injury, Jacob has gone from strength to strength due to his determination and sense of humour.

Following the distribution of the prizes there was a musical interlude in which Kate Anderson Year 7, gave a delightful piano solo – Minuet in E Major by J.P.Kirnberger.

Next on the programme was the address by Dr Kandiah. He told the audience that he once had a call from Social Services at 4.45pm on a Friday afternoon asking him and his wife to take a three year old vulnerable boy into their home. They already had six children but agreed to take him. Dr Kandiah was informed he was ” a biter!” What did he bite? He had already been to eight different foster families and didn’t speak much. However, with the love, compassion and care he received from the Kandiahs he flourished. Dr Kandiah said that every child needs a loving home and should be able to recognise that they have worth and that everyone has dignity and value. He told the students : 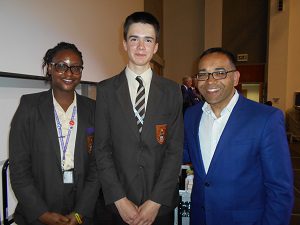 : We are more than the worst thing we have ever done. He also said that love will always conquer evil; they should always strive to play their part in trying to make the world a better place. Dr Kandiah spoke from the heart and his address was very inspiring; the audience showed their appreciation with enthusiastic applause at the end.

The second musical item was provided by Katie Hall Year 8 who gave a beautiful performance of The Sound of Music by R. Rodgers. Katie was also  awarded the prize for Music Years 7-10 and will be playing the role of Maria in the school’s production of the same name in July.

Mr Wilcock then gave his Headteacher’s Report. A Special Presentation was made to Mrs Chris Gentle who had been the Chair of Governors and supported the school on the governing body since 1996.

A Vote of Thanks was given by James and Rachel who particularly thanked Dr Kandiah for his memorable and thought-provoking speech.

The evening ended with the singing of the hymn Lord of all hopefulness and the Final Blessing.