You are here: Home › Primary › Education › Whiteheath Infant Pupils Take Part in the Kids Against Plastic Campaign
By Sue Midgley on 18th June 2018 in Primary, Education

On Wednesday, June 13th. at the end of the school day all the pupils from Whiteheath Infants School took part in collecting plastic rubbish from outside the school. Prior to collecting they had an assembly in which a very informative power-point presentation together with a video of Naomi Wilkinson, a presenter of cbbcs, the children’s  television station  who was also in attendance.  The presenters of the assembly were Freya Tracey and Oli Norton, two students in Year 7 at Haydon School, who feel passionately about what plastic pollution is doing to our oceans. They informed the pupils about how the plastic things we use and throw away can harm our oceans. There were evocative pictures of what plastic rubbish is doing to sea life. The main message they clearly delivered was DO NOT LITTER and the children were told what they could do to help.

In the past Freya and Oli have also made similar assembly presentations to Years 7,8 & 9 students at Haydon to raise awareness of plastic pollution. This was followed up by the school’s Student Voice whose aim was to make their school plastic free. They are well on the way to achieving this; currently they are taking steps to remove the final obstacle – plastic bottles. The school is raising money through non-uniform days and other activities to replace all plastic bottles by purchasing five Water Coolers with paper cone cups at a cost of £1,500.

After the assembly the pupils were very enthusiastic to play their part in collecting as much plastic rubbish as they could. Wearing recyclable protective gloves they set about their task for the afternoon under the supervision of Mrs Blake co-Head Teacher, Mrs Karen Norton who used to be a Teaching Assistant at the school, teachers, support staff and parents. Everyone was eager to fill their recycling bags and there was a pleasant competitive feeling as children were keen to display their collections.

It was an inspiring afternoon and hopefully these children will remain dedicated recyclers into adulthood thus protecting their world for future generations. Well done to everyone involved! 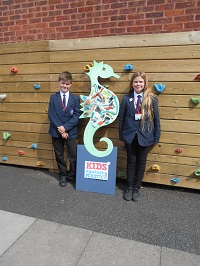 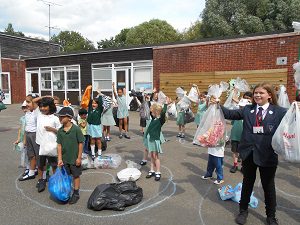