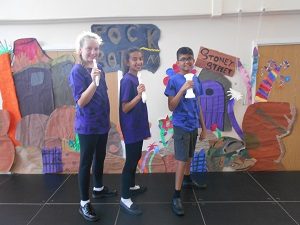 On Wednesday, July 3rd the pupils who will be moving to secondary school in September presented their final show for parents and friends. The title of the show was Rock Bottom named after the Stone Age village where the story was set. The Time Keepers played by Bonnie, Ameera and Josh explained that they were taking the audience back to the year 5000 BC when “it all began” ; they were, in fact, turning the clock back. This was illustrated by the cast enthusiastically  singing Tick Tock and performing a lively dance. 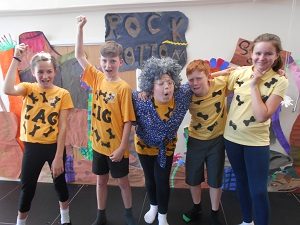 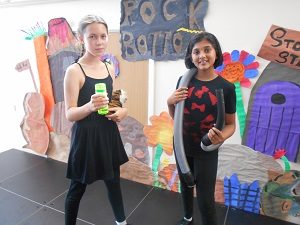 Later we were to meet the inimitable Lady Lava, who was obsessed with preserving her youthful features, played by Charlotte and her long-suffering servant Gravel played by Anjali. As Rock Bottom was situated within distance of the volcano Krakatoe-or-Two, Lady Lava summoned the Mini Miners and instructed them they must mine for cellulite so that she could stay young forever.

There couldn’t be a show set in prehistoric times without the appearance of a dinosaur and the audience was not disappointed. Bobby Cobblestone takes a dinosaur egg to Wild Willy and when it hatches it is named Rex. Bobby and Willy joined by the whole cast sing to the baby dinosaur welcoming it to their life.

Bobby Cobblestone is something of an inventor and the latest success is the clothes hanger! Lady Lava is impressed and promotes Bobby to The Egg Heads.There follows many twists and turns to the plot but finally Bobby invents a potion that reduces Lady Lava to a baby again. Her wish for eternal youth seems to have been granted and she will no longer pose a threat to the inhabitants of Rock Bottom! The message was that the secret of success is Perseverance!

This was a delightful performance by all the pupils. Their singing, dancing and acting was excellent and they were able to successfully convey the humour of the script much to the amusement of the audience who rewarded them with appreciative applause at the end of the show.

Mr Wright, Deputy Headteacher, thanked everyone for their efforts which he said made him very proud of them. He also warmly thanked Miss Spooner for all the time she had spent  over several weeks of rehearsals to produce such a fantastic end result.