Uxbridge College student, Sanjna Vekaria, appeared as the Unexpected Star on a recent BBC1 Michael McIntyre’s Big Show. Her performance was dubbed “better than the X Factor final ” after she sang Feeling Good, the Nina Simone track recently made a hit by Michael Buble, in front of a large live audience and a television audience of ten million. She was secretly nominated to take part by her mother, Chhaya, who was in the audience with around thirty friends and family.

Sanjna, 18, went through a series of BBC auditions which she was told was for a talent agency before appearing on the show. She said : “ When I woke up after filming the show, I literally had to slap myself in the face because I couldn’t believe it. But when I saw the shoes that I’d worn in the corner of the room, I knew it had been real.”

Sanjna who is studying History, Psychology and Sociology at College and practises taekwondo in her spare time, found herself face to face with Michael in the guise of a grandmaster, after being asked to teach at a fake training centre set up behind the theatre. She said : “ I was dressed to teach taekwondo and definitely wasn’t expecting to go on television.” Sanjna works part-time in M&S, Pinner and had to miss watching part of the show when it was broadcast due to her shift.

About her performance Sanjna said : ” I actually wasn’t nervous at all when it came to performing; anyone who sings has thought about doing something like this in their dreams. As I only had an hour to get ready I didn’t have time to get nervous. I didn’t know the song though. Luckily I had an autocue. ”

Since the show Sanjna has been working with a couple of producers and been given more work and she hopes to be able to build a career in singing. She already sings regularly at local events and at Westfield shopping centre in Shepherds Bush.

Let’s hope that she can fulfil her dream. Good luck, Sanjna! 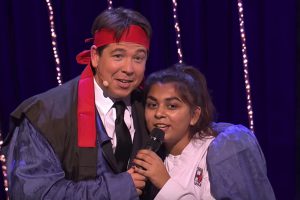