On Friday, January 31st, as part of the Association’s centennial celebrations, another oak sapling was planted in the grounds of Warrender Primary School. The tree will be a feature in what will become a sensory and memorial garden and  will also serve as an outdoor classroom in the future. An oak sapling is particularly appropriate as the school crest has three oak leaves and three acorns. 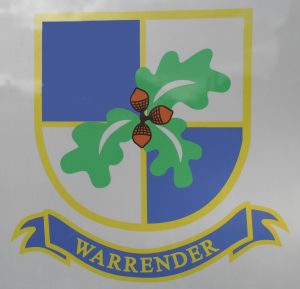 The pupils are very conscious of the importance of protecting the environment and have an active Eco Committee whose members took an active role in the ceremony. Mrs Close’s Year 5 Class were also present and were involved in answering questions put to them by members of the RRA Committee.

At the beginning of the ceremony Mr Graham Bartram, RRA Chairman, gave the assembled pupil audience a brief history of the Association and explained that oak saplings had been chosen for the schools’ plantings as the oak tree features on the coat of arms of the Ruislip/Northwood shield.

It was then time for the sapling to be planted in its new home. In turn each of the five Eco Committee members – Adam, Ishwari, Isla, Isaac, William – put a spadeful of earth around the sapling. William then placed a plaque in the ground on which was inscribed: Planted by pupils to mark the centenary of Ruislip Residents’ Association. This was followed by a reading by Adam and Ishwari of a delightfully relevant poem, The Acorn by Joseph Enright which had been specially chosen for the occasion by Mr Smith, Head Teacher. The acorn was told: ‘Some day from your mother/You will be free/To grow and be a mighty tree’. Both pupils were warmly applauded for their excellent, confident readings. 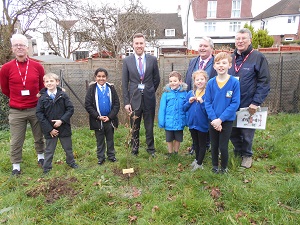 Mr Graeme Shaw, Woodlands Committee Member, then advised the children about the care of their sapling and asked them to let the RRA Committee know when they observed the buds bursting into leaves in the Spring. Hopefully, long after the current pupils have grown into adulthood, there will be a majestic oak tree for future generations to enjoy.