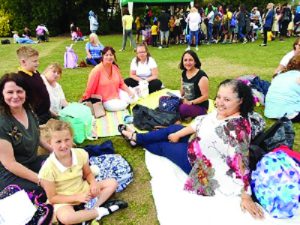 On Friday, July 14th, the Infant and Junior Schools hosted a Celebration which was held on the school field on a lovely, sunny afternoon. Both schools had much to celebrate this past academic year. They have formed a Federated Governing Body which means that they have one Governing Body resulting in the schools working more closely together. The Junior School was graded as Good at its recent Ofsted inspection. In its previous Ofsted inspection the Infant School was graded as Outstanding. Teachers from both schools together, with Governors, met to discuss what they jointly wished to have as their Vision and Ethos. The schools’ vision is An Outstanding Place to Learn which they hope to achieve through Creating Excellence, Engaging the Community and Improving Efficiency. The Ethos will expect all staff and pupils to adhere to the following values : Ambition, Togetherness, Opportunity, Respect, Curiosity, Happiness – A Torch to carry forward for the future. 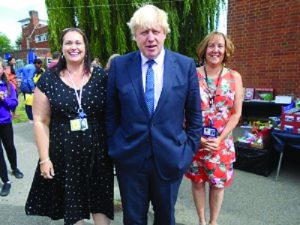 As well as parents, pupils, members of the local community, a representative from the Ruislip Residents’ Association and Cllr Michael Markham were invited to attend. There was also a surprise guest, Boris Johnson MP, Foreign Secretary. Mr Johnson was very popular, having selfies taken with parents and pupils as well as signing numerous autographs for the children.

There was plenty of entertainment throughout the afternoon including a great magician, bouncy castles, dance and gymnastics displays by pupils, face painting and craft stalls as well as an ice cream van which was very busy on such a warm afternoon. Parents and pupils were invited to bring a picnic which they could share on a designated area on the field.

The occasion was very successful in promoting the achievements of both schools who intend to work together to ensure the best outcomes for all their pupils.*