Kwame Kwei-Armah, whose raft of global accomplishments range from his current position as The Young Vic’s Artistic Director to staging original plays in the UK’s and America’s top theatres, has become Patron of Uxbridge College’s Performing Arts School, Praxis.

Praxis is delighted to welcome the internationally renowned actor, playwright, director and broadcaster who was awarded the OBE in 2012 for services to drama. and he has been a key voice in the Black Lives Matter campaigning and in supporting the progression of young black actors and directors.

Kwame agreed to become a Patron after Performing Arts Lecturer Rob Lane contacted him following the recent BBC documentary, My Name Is Kwame with Alan Yentob in which he revisited his roots. Kwei-Armah was born in Hillingdon Hospital and grew up in Southall. He said: I am honoured to be patron of this amazing institution. Exposing young people to the joys of live performance, to the honour deeply bound in its execution and reception is for me one of the most important roles we have as citizens of any nation. Art is how we are remembered.

Rob Lane said: We are absolutely thrilled to have Kwame on board, not only is he an amazing actor, writer and director but he has a massive commitment to supporting young actors, especially those of colour; he knows how tough it is for our students to come through in the performing arts. He is someone all our young actors look up to and it is a huge inspiration to have him on board as a patron. Kwame gets huge numbers of requests to become a patron or to become involved with organisations in other ways, so it is a real honour that he has agreed to support us in this way. We are really looking forward to having a visit once lockdown restrictions have eased and I know that all our students are following his work with continued interest.

Kwame was a former Chancellor of the University of the Arts London which is the awarding body of the College’s Creative Arts qualifications. He also achieved popularity when he played the paramedic, Finlay Newton, in the BBC drama series Casualty in 1999 to 2004 as well as other television and radio productions. 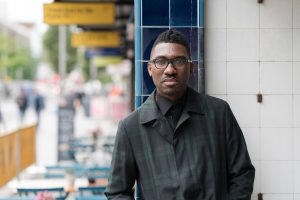 Praxis Performing Arts provides a dynamic environment for students to develop their skills and is also the name given to the college’s theatre where productions are staged to in-house and public audiences. Praxis, which is based at the Hayes Campus of Uxbridge College, offers courses in Dance, Music and Acting at Levels 1-4 for a wide range of starting abilities, all taught by industry professionals.