The school held its annual Years 11 – 13 Prize Giving for the Academic Year 2018 – 2019 on Thursday, December 12th. The Guest of Honour who presented the prizes was The Rt. Revd. and Rt. Hon. Dame Sarah Mullally DBE Bishop of London.

Upon entrance to the school hall the audience was entertained by Ethan Francis and Elizabeth Viala, two talented Year 12 musicians. The proceedings began with a speech of welcome by Head Boy Alex Reeves and Head Girl Madyson Martin-Hajaj who also gave the audience an interesting insight into the background of the evening’s Guest of Honour.

The prizes were then presented and the students from each group were introduced by their respective Head of Faculty/Year. In the first group Rosie Castle, previous Head Girl, was awarded the prize for English. Alexander Johns received the prize for Drama, in particular for his contribution to extra-curricular clubs and his outstanding choreography. The prize for Performance in a School Production at KS4/5 went to David Place who played the lead in the school’s summer performance of The Addams Family.

As well as prizes for academic excellence and contributions to forms the school awards prizes for Resilience at KS4/5. These prizes were won by Daniel Treacher and Arnold Okwuadigbo. Year 12 Commitment Awards were presented to Alex Reeves, Tania Nazarian, Sore Ogunmoyero, Danielle Hanshaw and Reanna Gregory for their charity fund raising efforts.

Within the Science faculty the KS5 prize for Biology was awarded to Altay Shaw who only joined the school in Year 12. He was praised by the Head of Faculty for his hard work and his willingness to help other students. H e was one of the students who also received a prize for Best Results at A Level. Altay is now studying medicine at UCL. The prize for Physics at KS5 was awarded to Isabel Newns who was described as “the student asking the hardest questions in class.” Isabel also won a prize for Best Results at A Level. 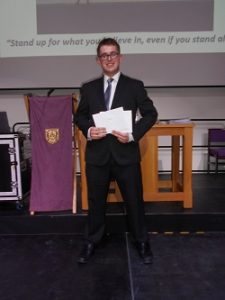 Finally the Prizes for Outstanding Achievement were presented. Among these was an award for English Literature awarded to Amy Child who is Bishop Ramsey’s first Poet Laureate; Services to the Community awarded to Katie Hurley for raising awareness of young people’s mental health and Outstanding Achievement in PE – Sporting Performance awarded to Tristan Abldeen-Goodridge whose talent has been noted by Aston Villa Football Club.

Following the presentation of prizes an inspiring address was given by the Guest of Honour. She congratulated all the prize winners and their parents for their achievements. As the day of the Prize Giving fell on Election Day the Bishop of London also referred to the fact that there had been a period of division in the country. She spoke to the young people about how difference can be a strength, that differences are a gift and should be respected and celebrated and can form the basis of a strong community. She also referred to the fact that the stonemasons who built Salisbury Cathedral always left their personal mark on the building and she posed the question to her young audience: What mark are you going to put on the building? 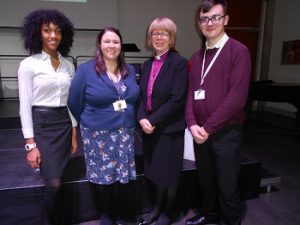 Mrs Nina Adamson, Head of School, then gave her report which was followed by a Vote of Thanks to the Guest of Honour and the audience by the Head Boy and Head Girl.

The evening ended with the singing of the hymn Lord of All Hopefulness and a Final Blessing from the Bishop of London.