The school held its Christmas Drama Evening on Thursday, November 28th. The audience was welcomed by Miss Carroll, Head of Drama, who explained that the evening’s programme had been put together by the students and the content had been worked on in extra – curricular clubs during the past two weeks with a short dress rehearsal that afternoon. Many of the participants were Year 7 students who had only started at the school in September which made the performances even more praiseworthy. 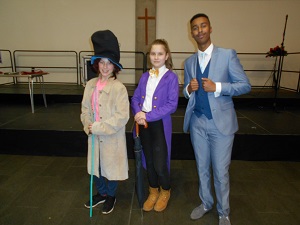 The programme began with eight cameo scenes inspired by Roald Dahl’s Charlie and the Chocolate Factory which ranged from meeting the characters in the story to Charlie receiving the chocolate factory from Mr Wonka. Each scene moved seamlessly from one to the next and was performed by a different group of actors. There were some excellent performances throughout and the finale was greeted by warm applause from the audience.

This was followed by a contemporary dance entitled Lost Boy which was performed by the Dance Club.

After the interval Year 8 Drama Students performed their version of Dr Seuss’ The Grinch who stole Christmas. The next item on the programme was a thought – provoking performance of The Spirit of Christmas written and directed by the talented Katie Hall, Year 10. The message was very clear – love, family and caring for others less fortunate than ourselves are the really important things, not food, drink and expensive presents. The message was reinforced at the end of the performance by a moving video.

The cast of “The Spirit of Christmas”

The final item of the evening was Bruce from the musical Matilda performed by the Glee Club. This delightfully amusing performance with lively singing and great choreography ended with Bruce’s face covered in chocolate cake!

Mrs Adamson, Head of School, congratulated the students for their excellent performances and referred to the show as a real “community performance”.