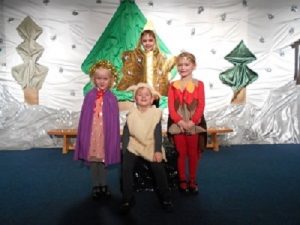 It was only December 3rd but surely the audience must have really believed that the Christmas season was now definitely upon us with the Reception’s delightful presentation of the Nativity story! The excited children from the three classes in fantastic costumes filed into the school hall to take their seats on the benches at the front ready for the performance; there was from some the usual waving at proud parents in the audience.

The stage provided a very effective backdrop with various cloth trees which had been fashioned by members of staff and bright tinsel stars. The first performance was by Miss Lambie’s Class dressed as shepherds who began with the song Knock, knock, who’s there accompanied by appropriate actions which introduced the theme of no room at the inn. This was followed by the singing of Mary’s boy child  Jesus Christ who was born in a barn.

This was followed by pupils from Mrs Calaco’s & Mrs Bull’s Class in silver and gold star costumes that lit up who performed Big Star. The second group of children dressed as shepherds and angels performed the visitation by the angels to the shepherds by singing Hey Shepherds, Wakey! Wakey! Listen to the news! to alert them to the news of Jesus’ birth.

The third performance was from Mrs Carter’s & Mrs McCarthy’s Class. The first group was dressed as sheep who danced and sang Baa Baa Bethlehem much to the delight of the audience. Pupils dressed as kings made up the second group who performed Calypso Kings. The audience joined in clapping to the rhythm of this infectious calypso.

Finally the whole Reception performed the actions and sang Away in a Manger, Rock the Heavens and We wish you a Merry Christmas which brought a few tears to adult eyes. The whole show was, indeed, delightful and a credit to the children and, of course, their teachers who encouraged them throughout the performance.

Mrs Dyer, Headteacher, congratulated everyone who took part and told the pupils that she was extremely proud of them.