You are here: Home › Further › Education › This Girl Can 2018 at Uxbridge College
By Sue Midgley on 27th March 2018 in Further, Education 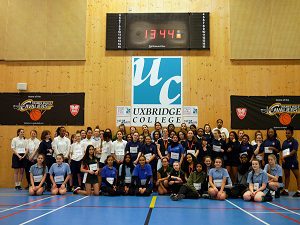 The event was organised by Eloise Newman, Course Team Leader and Sports Lecturer. Kat gave an inspirational talk and training session; she shared her triumphs and challenges with the group, as well as talking to Uxbridge College students. Starting her sporting career as a gymnast before switching to rugby, Kat found the strength and skillset developed in gymnastics helped her to progress quickly in the sport and was soon invited to England trials. She was unsuccessful in her first attempt but used this as motivation to succeed further.

She told the girls: I’m really pleased to be here as part of This Girl Can campaign – it’s such an important campaign. You girls, you can do anything you want to, any sport you set your sights on. Don’t let anybody tell you that you can’t, because you can. Find your thing and go for it.

Rianna Dean spoke about how education played a big part in her achievements and highlighted how Uxbridge College allowed her to train and study at the same time, working with her meet her deadlines. She said: It was only right that I returned the respect my lecturers had shown me by putting in the hard work and producing good quality work. You can do that in your life too; you are in control of the hard work you put in to whatever you do.

The event also involved Zuu training – a style of training using movements from the animal kingdom – as well as pilates, boxing, handball, netball and an educational workshop focusing around sports development and the different career opportunities available to the girls in the sports and leisure industry.