On Monday December 18th Year 6 pupils hosted a Christmas party for local senior citizens in the school hall. This is an annual event which is advertised on the school website and via e-mails sent to the parish offices of Ruislip, Eastcote and Harefield inviting people to attend. This year the school received acceptance from 68 respondents.

Miss T McManus, Headteacher, was in reception to greet the visitors some of whom had attended on previous occasions. Year 6 pupils were stationed at the entrance to the hall to welcome guests and show them to a seat at one of the tables. The pupils were attentive hosts who served everyone with tea, coffee and cakes provided by the school’s Parents’ Association.

The pupils really enjoyed the experience and some were happy to share their feelings about the occasion: Amy – I like it because it’s fun and you get to serve people and keep them company. Michael – I think it’s a great idea as we can have fun with the over 60s and get to know them. Mia – I like to do this because it makes them happy and it makes me happy too. Niamh – It is really good because it helps you to be responsible.

As well as the delicious cakes there was also entertainment for the guests. This began with singing from Year 2 pupils who performed Little Donkey, The Love Shone Down and Away In A Manger which were warmly received by the guests. Next were the Reception Class who are only 4 and 5 years old who performed delightfully Jesus Was Born In A Stable and Jingle Bells. Their performance certainly made their audience smile and they showed their appreciation with lengthy applause. Something a little different followed as Mrs Gee, music teacher, Angelo & Sennet played We Wish You A Merry Christmas on their flutes.

The School Choir were next to perform and their songs were introduced by twins Poppy & Daisy. Their performance was very enjoyable and lively which began with Walking in a Winter Wonderland and Song of the Winter Wind. 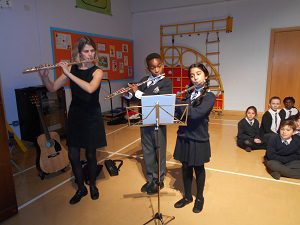 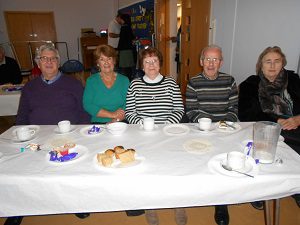 Some of the guests enjoying the afternoon

This was followed by Jack Frost and Jingle Bells Rock both accompanied on the guitar by Mrs Gee which brought the afternoon’s entertainment to a happy ending much appreciated by the guests.

Miss McManus said that she hoped that the afternoon had brought some Christmas spirit into your lives and she wished every one a Happy Christmas. It was heart – warming to see children giving something to their community in the true spirit of Christmas.