You are here: Home › Environment › Ruislip Woods Trust and the expansion of Copse Wood
By John Swindells on 7th May 2021 in Environment

Until October 2020 the triangle of woodland at the top of Copse Wood, (29.1 acres) bordered by Copsewood way was in private ownership, the rest having been sold to the Middlesex County Council by Kings College in 1938. In the 1982 Long Term Management Plan for Ruislip Woods adopted by the London Borough of Hillingdon (LBH) a recommendation was made that the wood be purchased and incorporated into the public open space. 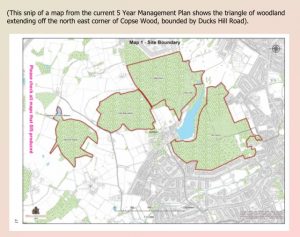 In 2013 two Trustees of Ruislip Woods Trust (RWT) contacted the owners to discuss the purchase of the wood and eventually an offer was made which was declined. In January 2020 initial conversations between myself and one of the owners of this woodland started and after discussing it with the other Trustees we decided to make another attempt to buy the land. Having obtained a valuation, I made a new offer to the owners and we eventually agreed on a purchase price of £88,000. Following protracted contract negotiation between the parties completion of the purchase by the Trust took place on the 7th October 2020 whereupon it was immediately sold to LBH.

In Autumn 2020, the Department of the Environment set up a £40M Green Recovery fund administered by the National Lottery Heritage Fund, Natural England and the Environment Agency and opened it for applications. The fund is designed to create 3000 jobs for environmental projects. LBH and Groundwork made an application and were jointly awarded £190K. The projects to be funded locally include management work in the new part of Copse Wood and the appointment of an Education officer based at the Woodlands Centre at Ruislip Lido. The overall project is entitled Natural Connections Colne Valley.

A steering group for the project was created in December and consists of representatives from LBH, Ruislip Woods Trust, Bucks County Council, Groundwork South, and the Colne Valley Park.

Groundwork has set up “Green teams” to undertake the practical management and have appointed a Project Manager and Green Team Supervisor and we are waiting for news from LBH regarding the appointment of an Education officer.

The Green team started work at the northern end of Copse Wood in mid-April and has been removing invasive species such as Laurel and Holly and will be undertaking some coppicing of the Hornbeam each side of the official footpath R63. 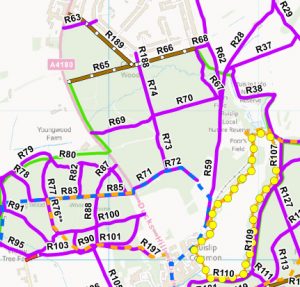 At the 13th April 2021 RWMAG (Ruislip Woods Management Advisory Group) meeting, the guest Councillor Eddie Lavery LBH Cabinet Member for Environment, Housing and Regeneration agreed with the proposal to set up the necessary Management Plan to allow this purchase to be added to the NNR in time for the 25th anniversary of the Ruislip Woods NNR being designated London’s first NNR in May 1997.

View all posts by John Swindells →