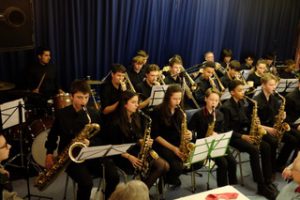 After the resounding success of last year’s Chanukah * Jazz Evening, The Ladies’ Guild invited the Hillingdon Youth Jazz Band for a return visit to this year’s Chanukah Party held on Sunday, December 2nd 2018 which was sold out.

Rabbi Stanley Coten extended a very warm welcome to all who attended. The Rabbi lit the first Chanukah candle and the Jazz Band commenced the entertainment.

The twenty eight piece Jazz Band performed a wide repertoire including A Girl from Ipanema, In the Mood and Fly  Me to the Moon. They also played a new piece of music called Zebrano which the Ladies Guild purchased out of the donation given to the Jazz Band for 2017.

We were honoured by the presence of Rabbi Livingston, who is the Senior Chaplain to the Armed Forces and, as such, was used to hearing brass bands playing and he thought the Hillingdon Jazz Band was definitely up to Armed Forces’ standards – no small accolade!

Menahem Briskman, Chairman of Ruislip Synagogue, said that we were privileged to be able to host this wonderful band for the second year running. The band is a credit to the London Borough of Hillingdon and his only regret was the fact there was not enough space to accommodate all who wished to attend.

The Jazz Band has been a feature within the educational services of Hillingdon for over forty years. The young musicians work with professional players; they perform at many venues such as the Albert Hall and events travelling on a forty foot lorry in a New Year’s celebration parade representing Hillingdon, plus their performances at local venues, now including the Ruislip Synagogue for the second year running.

The band rehearses on a weekly basis during term time and consists of trumpets, trombones, saxophones and a rhythm section. It is inspirational to see these youngsters playing so earnestly and showing the good side of some very talented teenagers. Their very dedicated music master, Melvyn Care, who plays an enormous part in improving their abilities and success, assists them in no small way.

* Chanukah is the Jewish eight day winter time festival of lights which begins on December 2nd. 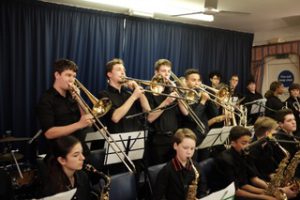 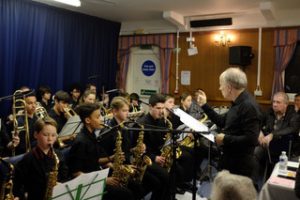