The pupils participating in the event were all members of the school’s Gardening Club which is organised by member of staff Mrs J Fremantle. After some introductory comments by Mr Bartram the oak sapling was planted by Sophie and Theo and a commemorative plaque was placed in the ground by Edward. This was followed by the group reading by the pupils of two poems, Grand Old Oak and The Acorn. 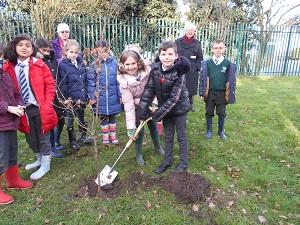 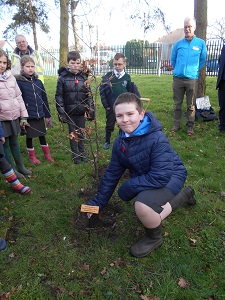 Edward places the commemorative plaque in the ground 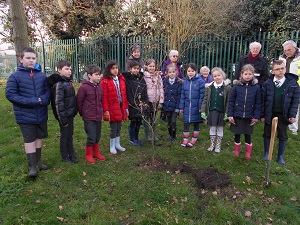 Pupils were then given some tips on keeping the tree healthy by Mr Graeme Shaw, Woodlands Committee Member, which was followed by the children having the opportunity to ask questions about trees and their importance to the local environment. They asked some intelligently searching questions which kept Mr Shaw on his toes!

This was another delightful occasion which cemented good community relations and contributed to making children aware of their importance for continuing to build that important cohesion.