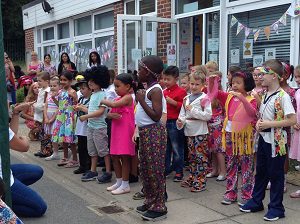 During the week beginning July 9th. BWI celebrated fifty years on their present site in Southcote Rise. In 1968 the school moved from Eastcote Road to their brand new building. Mrs S Johnston, Deputy Headteacher, had unearthed an old video of the school being built and its opening day showing pupils entering through the gates.

All week pupils had been making bunting, painting pebbles in bright colours, decorating table cloths and place mats. These classroom activities were in preparation for the culmination of the celebrations.

On Friday, July 13th the celebrations were in full swing. On a warm, sunny afternoon the playground was full of brightly decorated gazebos under which all the pupils were seated at tables covered with the cloths they had created earlier. All the children and staff were dressed in 1960’s clothes – flares, flowers in their hair and CND badges on display. Mrs Johnston’s outfit was reminiscent of Twiggy and Mrs Westbrook, Headteacher was wearing a very “snazzy” and colourful mini dress.

After lunch the entertainment began. Every class in each year group from Nursery to Year 6 performed a well known 1960’s song much to the delight of all the adults present. These included Summer Holiday, Hey! Hey! We’re the Monkees!, Twist and Shout and Build Me Up Buttercup. The children were brilliant, performing songs with appropriate actions and dancing to the music.

After the Year 6 pupils had performed Mrs Westbrook thanked the pupils, teachers, parents and the Parents’ Association for all their hard work in making the celebrations so successful. Finally numerous balloons (purchased by parents) were released bearing a note saying that if found a message should be sent to the school so they could see which balloon went the furthest.

It was a fun afternoon enjoyed by everyone present. Here’s to another fifty years for BWI! *