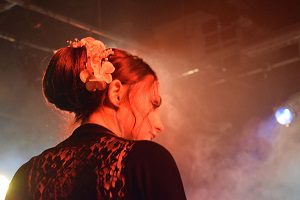 One of the Hair Creations 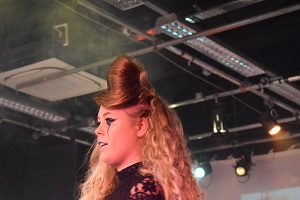 From ghastly ghouls to beautiful brides, this year’s Freestyle Hair & Beauty catwalk show gave Uxbridge College students an opportunity to showcase their professional skills. The dynamic Level 2 and 3 Hair, Beauty and Media Make-up students both created and modelled hair, make-up and costume inspired by diverse sources. They even danced, sang and acted in the show which was performed to family and friends in The Edge theatre at the College’s Hayes Campus in Coldharbour Lane.

The signs of the Zodiac, Hollywood glamour, 1980s hits such as Michael Jackson’s Thriller and the forces of nature were among the themes for the night.

Around 150 students took part, spending just two weeks preparing for the show starting with creating mood boards, designing their looks, sourcing and making costumes, learning dance routines and putting it all together on the night.

The show was opened by Performing Arts student, Rachel Morgan, who sang and played the guitar. Two students, Lisa Edwards and Tasmen Styles  compered the show which they organised with Cheryl Robinson.

Louise Southam, Head of Hair, Beauty & Hospitality, Early Years and Performing Arts, said : This was a fantastic show and we are so proud of the professionalism of everyone who took part. It is so impressive that not only do they create their looks from scratch but take part as models and performers no matter how shy and retiring they might be in their usual roles! This whole show is a fantastic showcase for the whole range of Hair and Beauty skills and great experience for everyone.