Young people and adults who excelled in education and skills training, fought the odds, gave time as volunteers and supported their peers were recognised at an awards ceremony at The Beck Theatre in Hayes.

Uxbridge College’s Annual Awards returned to the stage with motivational speaker Cameron Parker sharing his inspirational story and presenting prizes, including awards for employer partners working with the west London college. Cameron talked about his life, including playing American Football with the GB Lions, becoming the first university graduate in his family and using his dyslexia and ADD to his advantage. His story resonated with award winners – chosen from the college’s 8,000 part-time and full-time students – and their friends and families who came with them to the celebrations.

Performing Arts students from Uxbridge College’s Praxis Theatre at Hayes campus also played a key part opening proceedings with performances of You’ll Reach Up and You’ll Rise Again and You Will Be Found by music and acting students and a dance performance of Another Day of Sun. 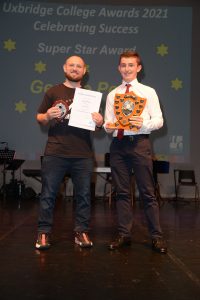 The overall winner who was presented with the Super Star Award and Star Award for Sport, Travel and Public Services was George Penn. This was to acknowledge his outstanding academic and personal performance during his two years as a student.as well as achieving top grades in his BTEC Level 3 Sports Extended Diploma, he also successfully completed a Biology A Level in his spare time and is now studying Physiotherapy at Brunel University. He took part in boxing lessons through college and his studies included project-managing a new sporting initiative to help overcome racial inequalities in society.

Dr Darrell DeSouza, Group Principal and CEO of HCUC (the merged college group for Uxbridge College and Harrow College) said: This event is a fantastic opportunity to step back and see just how much our students achieve in so many ways during their time at college. Whilst Uxbridge College and harrow College both stand in their own right as colleges, our shared goals and partnership opportunities have a value for everyone. I’m also very pleased to honour our employer partners from across west London, who not only support thousands of learners across the college, but join in the vital dialogue about how best to fit Further and Higher level training to business needs.

Dylan McTaggart, HCUC Deputy CEO and Principal of Uxbridge College said: It’s been really inspiring to see so many of our students and their families once again celebrating their achievements – especially when they’ve had so much to contend with during the pandemic. We’ve had some particularly impressive young people and adult learners this year and I have no doubt they will continue to make fantastic contributions to their communities and the world of work, as well as fulfilling their own dreams. Every single student is an individual and Uxbridge College is committed to helping them find the right path to their own style of success – be it achieving a university place, getting permanent work through an apprenticeship or gaining enough skills to join the next level of study.