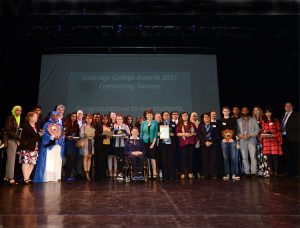 Claire Lomas MBE – the first and only paralysed person to walk the London Marathon – honoured Uxbridge College students for their achievements at a moving awards ceremony held at the Beck Theatre in Hayes. It recognised winners from across the College’s academic and vocational programmes, including GCSEs, A-levels, BTEC qualifications, Apprenticeships and HNDs as well as from among the 1,000 employers with whom the College works.

Claire is paraplegic, paralysed from the chest down but able to use her arms, after a horse riding accident. Dubbed the Bionic Woman by the media as she completed the 2012 London Marathon in seventeen days in a pioneering ReWalk robotic suit. She raised £210,000 for Spinal Research. She lit the Paralympic Cauldron in Trafalgar Square in 2012 and has raised more than £500,000 for the Nicholls Spinal Injury Foundation. Claire has written and published her autobiography Finding My Feet, takes part in motorbike racing using only hand controls. She was made an MBE this year.

Among the winners to whom Claire presented awards was Michael Lawless, 19 who was made the overall winner with the Super Star Award sponsored by Lloyds Bank Commercial. He was chosen for his fantastic attitude, brilliant artistic skills, constant dedication to improving and commitment to overcoming challenges. He progressed from the Level 2 Game Design & Animation to the Level 3 in Game Design at the College, achieving top Distinction grades despite medical problems. Among his work is an indent – a short sequence used on television to identify a channel or company, which he has created for Straw Cat Productions. Michael is off to Hertfordshire University to study Animation and hopes to go on to work as a Games Designer.

In her speech of thanks to Claire, Laraine Smith OBE, Principal of Uxbridge College, said : Claire’s story shows exactly how far courage, determination and hard work can get you and the same applies to those honoured by awards this year at Uxbridge College’s ceremony. And whilst many of our award winners have succeeded with high grades in academic and work related training, it is also their personal stories that give their achievements such meaning. Congratulations to everyone who has received awards this year.*