You are here: Home › Further › Education › Uxbridge College Is Judged A Level Best “Value Added” in London
By Sue Midgley on 19th February 2018 in Further, Education 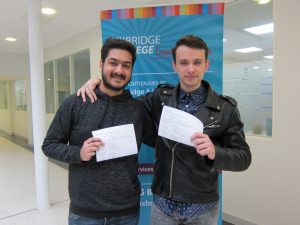 Value Added is a measure of how much improvement students make compared to their peers nationally. Sometimes described as “distance travelled”, Value Added reflects how much “value” a school or college adds to its students by comparing students’ achievement levels before they begin their A Levels to their performance when they finish. The Department for Education (DfE) figures show that 16-18 year olds taking A Levels are making better progress at Uxbridge College than any other Sixth Form College or Further Education College in Hillingdon, or the capital as a whole. The figures for 2017 measure student improvement which produces what are known as Value Added scores. The statistics rank the progress of all A Level providers including colleges, school sixth forms and independent schools.

Amanda Washbrook, Head of Uxbridge College Sixth Form Centre said:“ It’s really important to us that we help every student achieve the very best they can while they are here with us, whether they achieved Cs or A*s at GCSE. Increasingly, measures of progress such as the A Level Value Added score are viewed as the best indicator of how well a school or college is doing for its students. It’s good to see that the DfE data that has just been published reflects the hard work of all my staff and the excellent progress our A Level students are making.”