On Friday, January 24th., as part of our project to plant one hundred trees to celebrate the Association’s centenary, an oak sapling was planted on the school site. This ceremony followed the planting of the first tree last month which was attended by the Mayor of Hillingdon.

Ms T McManus, Headteacher, had kindly consented to having the sapling planted, as have all the Headteachers of every one of our local schools, much to the delight of the Committee. 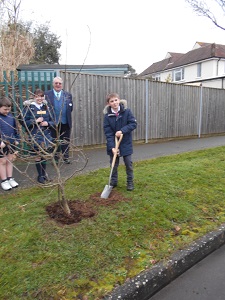 Mr Graham Bartram, RRA Chairman, opened the proceedings by giving a brief history of the Association and explaining to the pupils present that an oak sapling had been chosen as the oak tree features on the coat of arms of Ruislip/Northwood.

The Head Boy, Joseph and Head Girl, Erin, were then invited to “plant” the young tree which was followed by the placing of a plaque in the ground commemorating the event by Deputy Head Boy, Christy and Deputy Head Girl, Grace. The four pupils then read two very appropriate poems: Shady Woods by E M Adams and Tall Trees by Eileen Mathias.

It was then explained to the pupils the importance of trees for the environment and their future and they were asked to take care of the tree for those who come after them. They were also invited to watch for the buds to appear in the Spring, take photos and draw pictures to send to the Committee so its growth can be logged.

Finally Ms McManus thanked the Association for the gift of the tree.

In the next few weeks Ruislip oak saplings will be planted in all our local schools. Keep an eye on the website for further reports of the plantings. 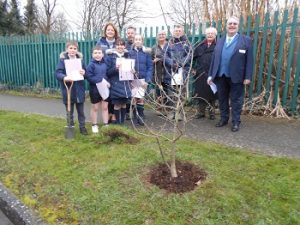 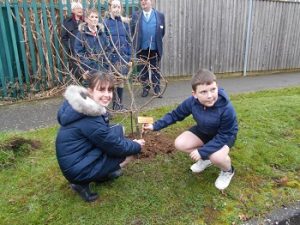 Grace and Christy with the commemorative plaque