The charity Halo, which is run entirely by volunteers, provides bereaved children and families from the local area and beyond with support, counselling, art therapy, weekly drop-in sessions, a monthly Expressive Art & Play Group, a bereavement book library and personalised memory boxes and cushions.

The charity recently celebrated the launch of its new Head Office at Hayes Business Studios at Uxbridge College’s Hayes campus with special guest the Worshipful Mayor of Hillingdon, Cllr. Carol Melvin and her husband and consort, Andrew Melvin. The Mayor has chosen Halo as one of the three charities she will be supporting through her fundraising activities during her year in office. Other guests at the launch included families who have benefitted from the charity’s work, supporters, therapists, 13 year old Halo volunteer and ambassador, Stevie and X Factor singer, Marianna Zappi.

As well as offering an access point for Halo’s services, the new HQ will be used as an office space from which to apply for grants towards opening a Bereavement & Play Centre. Supporters are also raising money through a range of activities including sponsored walks, head shaves and a sky dive.

Alia Jones, Founder of Halo’s Children’s Foundation, said : Halo’s HQ launch was a fantastic event and everyone had a great time – we were thrilled to have the Mayor of Hillingdon with us and are very grateful she has chosen to support us. We are really excited about having a single point of contact for all our services and a dedicated space for fundraising activities. 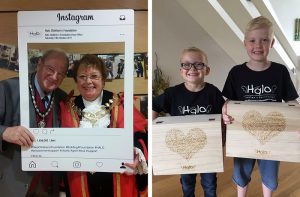 The Mayor and Consort at the launch

Alia founded the charity after losing her own husband when her children were aged 2 years and 3 weeks old. She was recently chosen as a final nominee in the Women of the Year Awards, which celebrates the achievements of exceptional women from all over the UK, and attended the organisation’s annual lunch as well as appearing on  ITV’s Lorraine Show which supported the event.

For more information go to :