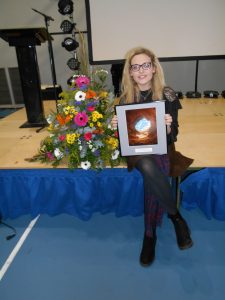 On Thursday, November 14th the school held its annual Presentation Evening in the school hall before a packed audience including The Worshipful Mayor of Hillingdon, Cllr David Yarrow, other invited guests, parents and students. The proceedings begin with opening remarks by the Chair of the Governing Body, Cllr Eddie Lavery which was followed by the Review of the Year by Headteacher, Mr Gareth Davies, who made reference not only to the school’s excellent academic achievements but also the many diverse sporting, musical and dramatic activities as well as their community engagement. Mr Davies also announced that in September 2020 Ruislip High School will be opening their new Sixth Form Centre and units specially designed to accommodate autistic students and those with physical disabilities.

There then followed a delightful performance of Read all about it ,originally performed by Emeli Sande, by five vocally talented Year 9 students which received appreciative applause from the audience. Two Year 7 students, winners of the KS3 Poetry Competition, then read their excellent poems entitled Late Midnight Project and Self Discipline. Framed photographs were then presented to Year 7 student winners and runners up of a photography competition. Next came the presentation of 10th Year Anniversary Bursary Awards. Hillingdon Local Authority has provided a bursary of £10,000 to the school in recognition of its first ten years. £1,000 is being given to ten Year 13 students over the next five years to support them with their higher education fees. This year’s recipients, ,Rebecca Sherlock and Khadra Mohamed, were presented with their certificate acknowledging their bursary and a book of their choice.

Mr Davies then introduced the Guest Speaker, Emily Fishman, whose inspiring speech was undoubtedly the highlight of the evening. The subject of her speech was Success and how it can be achieved despite life’s challenges. Emily joined the second cohort of the school in 2007. She described herself as a “shy but eager Year 7 student , keen to learn and move up the success ladder”. However, in January 2008 she was diagnosed with a severe spinal condition which would require major surgery. In September 2008 she was admitted to hospital where she spent six weeks recovering from two major operations. She missed three months of school and when she did eventually return in Year 8 it was on a part time basis at first. Instead of giving up hope of any real academic achievement, this experience made Emily more determined to prove herself capable of success by using all the opportunities the school provided. She certainly did so; in August 2012 she received excellent GCSE results and embarked on her sixth form courses. Emily admitted that the idea of going to Oxbridge never crossed her mind until the Head of Sixth Form, Mr Griffins,suggested it to her. She told the audience that she had always thought of Oxbridge being a place for “posh” people, those in her words “better than me”. Eventually in 2014 she was offered a place at Cambridge to study history which she took up in October. Emily told her student audience that “success isn’t a simple ladder of progression. Sometimes you fall off and that’s OK. It’s not about falling off that’s detrimental, it’s how you get back on and keep climbing.” Now a teacher of history at a north London school, she spends her days helping others succeed and achieve their dreams. Her advice was not to waste the opportunities that school offers, grab it with both hands and begin climbing the ladder. Emily closed her speech by quoting Greta Thunberg, the young Swedish environmental activist, : ” The future belongs to those who believe in the beauty of their dreams.” Finally she wished Good Luck to them all.

Emily certainly is a role model to all Ruislip High School’s students and hopefully they take on board her excellent advice. She was presented with a gift by the school’s Deputy Head Student.

The Mayor was then introduced and spoke after which he was thanked for attending and presented with a gift by by the Senior Head Student.

There followed the presentation of Form prizes, a very professional piano solo performance by David Chen, year 8, presentation of Subject prizes and Staff Awards. The final performance of the evening was given by the Year 7 Choir who sang Count on Me. The final presentation of the evening was that of the Bestowed Prizes. These awards are in the name of past students, staff and friends of the school in recognition of a variety of personal and academic achievements. The Closing Remarks were delivered by Assistant Headteacher Ms Joanne Cotton.

The evening was a real celebration of the impressive past and present achievements by students of Ruislip High School and the continuing aspirations of all those connected to the school.