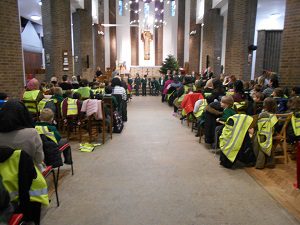 The Shepherds at the front of the Congregation

The pupils, accompanied by Miss Sheila O’Neill, Deputy Head and members of staff, walked from school to the church on a miserable, damp morning and filed in and took their seats in a very orderly way and waited quietly for the service to begin.

The Rev’d Jane Manley, the parish priest, welcomed everyone and the service began with the singing of We Must Travel Home. Throughout the service the story of the birth of Jesus was told in parts by readings from the pupils. The first reading describing Mary and Joseph’s journey to Jerusalem was read by Susan. Next came Robson’s reading followed by the singing of The Shepherds Hey. A number of pupils who were the shepherds took their place in front of the altar. The singing was very lively, with pupils doing appropriate actions. Sofia then read about Jesus’ birth in the stable and Ameerah told us how the shepherds were visited by an angel who told them to go to Bethlehem to see the baby. Disco Star was then sung by the congregation. Luqman then told how the shepherds saw the baby in the stable and went back to tell everyone about the special baby. The coming of the Wise Men was described by Erin followed by the singing of How Life Has Changed. The final reading was given by Jake who described how the Wise Men found the stable, knelt and gave their presents.

All the pupils read very confidently for ones so young and their teachers were rightly very proud of them. Their singing was delightful, with every pupil taking part. The behaviour of the pupils throughout the service was impeccable – they were a credit to the school.

One of the highlights of the service was a performance given by Al Aqmar, Taylor and Scarlett (pictured) who sang beautifully on their own Angel Gabriel Came to Stay before all the pupils joined in.

The Rev’d Jane then told another version of the Nativity in a charmingly interactive way. She told the pupils that whenever they heard the words baby, Bethlehem, animal, angel, star, king they were to perform the relevant actions which she demonstrated before reading. This was great fun – even all the adults took part; this really brought the story alive for the children.

A final prayer and blessing was given by the Rev’d Jane.

The Tuesday service was for the Junior pupils and their singing, reading and behaviour was also reported to have been equally excellent. These carol services were a great start to the Christmas season for all the school’s pupils.* 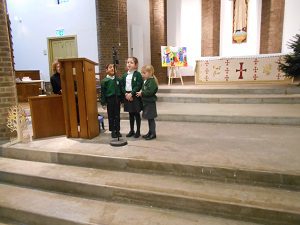