You are here: Home › Further › Education › National Apprenticeship Week at HCUC
By Sue Midgley on 17th March 2022 in Further, Education

The apprentices from the merger group of Harrow College and Uxbridge College were honoured at the West London Business (WLB) Awards in a glittering ceremony, the first in-person event of its kind since pre-pandemic, during NAW. Harrow College Principal, Jo Withers, presented the HCUC sponsored Young Entrepreneur of the Year (under 24) award in the Next Generation Awards category of the competition to winner Ariana Magazine.

Alana-May Brannan (West London Community College) and Michael Salmon (Caron Group) scooped Apprentice of the Year awards and Jack Utterson (Burnham Electrical Services Ltd.) picked up the accolade of Highly Commended Apprentice. The guest star at the WLB event held at Twickenham Stadium was Annabel Croft, the west London businesswoman and TV presenter who made her name at the age of 15 as the youngest Briton to play for Wimbledon main titles in nearly a century. 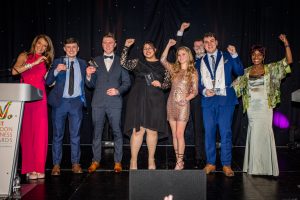 I would also like to acknowledge the fantastic support of all the staff and employers who have worked with them on their journey.

Harrow College Principal, Jo Withers, said: We were really proud to be  sponsoring the Young Entrepreneur of the Year (Under 24) Award to the very worthy winner in the WLB awards for FE colleges, encouraging the next generation of under 24s in this way is a fantastic opportunity.