On Thursday, July 11th the school presented  a wonderfully entertaining show with the great title of Robin Hood and the Sherwood Hoodies. Headteacher, Mrs Kate Needs welcomed the audience and informed them that they were “in for a treat” and she was not wrong!! 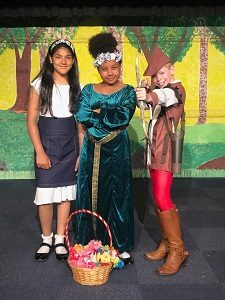 Nursie, Marion and Will Scarlet

There was a lively opening to the show as we were introduced to Maid Marion, played by Kayla, who had returned from a stroll in Sherwood Forest much to the dismay of her guardian Nursie Gerty played by Priyanshi who felt that she could have been in danger alone in the forest. The action was accompanied by an enthusiastic rendition of the song, When You’re Living in Sherwood.

Soon we met the unpleasant Sheriff of Nottingham, played by Nathan, who is spokesperson for the evil King John played by Max M. Both boys gave amazingly confident performances for pupils of their age. We learn that the king is to put up taxes and the Sherwood villagers are not happy. 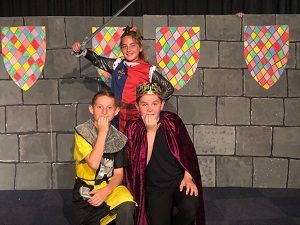 King Richard (standing), the Sheriff of Nottingham(L) and King John

Another stellar performance was given by Dillon who played the histrionic Robin Hood who announces his arrival by proclaiming: “The name’s Hood, Robin Hood, licensed to thrill”. He and his Merry Men, a group of wandering performers are honing their song and dance skills in a secluded part of the forest. The Skunk Scouts entered and presented Robin with a letter from Marion. Some good news prompted them to burst into dance and song. 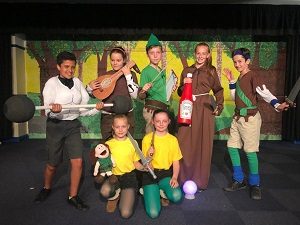 Robin and the Sherwood Hoodies

Later Robin received an application for a new member for his group -one Will Scarlet played by Reuben who very ably brought out all the dash and humour of his character, not to mention his dodgy skills with a bow and arrow!

As the plot moved on two ex-burglars, Grabbit played by Nimi and Bolt played by Sachi (amusingly referred to as a pair of nickers) join the king’s Castle Crew along with Gavin Gutwrencher played by Erica and his sidekick Genghis played by Jack M who torture the king’s enemies with their new invention The Squisher.

True to the original tale of Robin Hood, he and his Merry Men rehearse stealing from the rich to give to the poor. However, they were not very good and managed to return money they stole, much to the disgust of Marion.

The Sheriff prepared to capture Robin but this did not go to plan. Grabbit and Bolt mistakenly brought Marion to the king who realises that she could be bait for Robin and she was sent to the dungeon. His plan worked and Robin, Nursie and most of his band were captured. After a few surprising twists and turns in the plot, the show finished with a great performance by Robin and his Merry Men for which Robin was awarded an oswald!

This was undoubtedly one of the best shows that the school has produced. It was a very polished production with some amazing singing, acting and dancing from all the pupils who had enjoyment written all over their faces throughout. The set, costumes and props added to the audience’s enjoyment. Congratulations to all the staff and pupils whose hard work produced such a great show.