The school held its annual Music Concert on Thursday, June 20th in the school hall. The performers included a wide range of children, including those who have private music lessons as well as those who are taught by the school’s group of dedicated peripatetic music teachers.

The evening began with a welcome to the audience by Mrs Kate Needs, Headteacher, who then announced the first performer who was Amy Martin, Year 5, who played The Old Castle on the violin. This was followed by solo performances on the piano, recorder and French horn. Next came three guitar duets introduced by the pupils themselves. Their teacher, Joe Card, sat on stage with those pupils who had not been learning their guitars for very long to encourage them and help if required which definitely boosted the pupils’ confidence. There were then some delightful guitar and piano solo performances.

More solo performances followed, notably those by Ruby Quill, Year 5, who played Holiday in Paris on the piano, Ethan Quill, Year 3, who gave an excellent rendition of Airstream ’65 on the drums and Reuben Moore who played the moving Where is Love? from the musical Oliver on the French Horn. Another very professional performance was given by Archie Hipgrave who played Sun Down on the clarinet.

A group of Year 3 pupils who could be said to have “stolen the show” were the P.Bone Club. These boys and girls, who had only been learning to play their instruments, a simpler version of the trombone, for a few weeks, played two great numbers. 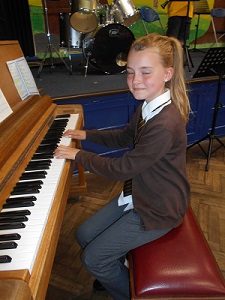 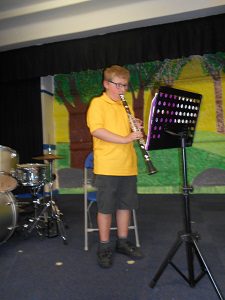 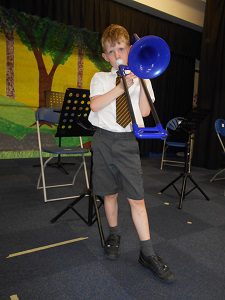 Felix Moore on the P.Bone

The latter part of the concert featured more guitar and keyboard solos and duets as well as a lively performance of the Year 3 Clarineo Club. This instrument is a simpler version of the clarinet and does encourage some pupils to progress to playing the clarinet.

Finally to end the concert there was a solo flute performance of God Save The Queen by Lola Waddingham. Mrs Needs then congratulated all the children for their excellent performances as well as thanking Miss Baker, Music Lead, who also introduced some of the performers and Mrs L Saunders. Also thanked were Joe Card and Jo Slade for giving up their time to help and accompany their pupils.