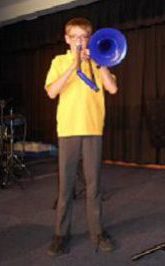 The school held its annual Music Concert on Wednesday, June 27th to showcase the diverse musical talents of its pupils. Over fifty children of varying levels of performance took part. The school is fortunate in having a great team of peripatetic music teachers who support the pupils who learn a variety of instruments. Some of the pupils had only been learning for a relatively short time but it was great to see how confident they were in performance which is, undoubtedly, due to the encouragement they receive from their teachers, some of whom were present and accompanied their pupils on the evening. Other pupils from Years five and six who had been learning their instruments for longer gave excellent performances.

The concert opened with an enthusiastic performance by the school choir who sang The Tiger and The Rose which they recently performed at Brunel University accompanied by the Royal Air Force Central Band to celebrate the centenary of the RAF. All the members of the choir were wearing the Hillingdon T-shirts they wore at that concert.

This was followed by drumming solos, a solo piano performance, a violin duet and two violin solos. Joe Card, guitar teacher, introduced the next item which was solo guitar performances from seven pupils some with whom Joe sat on stage with his guitar to give them extra confidence. The pupils introduced themselves and the pieces they were to perform.

The next item on the programme was The Clarineo Club which consisted of five pupils playing an instrument which is a cross between the clarinet and the recorder. They played Get Ready which was followed by an excellent performance of Oh When The Saints Go Marching In. 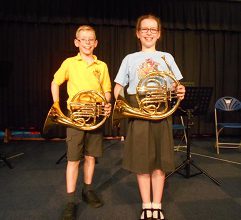 A solo performance on the piano was followed by Brass solos and duets. These performers had been learning their instruments for several years and this was reflected in their accomplished performances. Thomas Nettleship, Year 6, played The James Bond Theme on the trombone which he recently played for his Grade 3 music exam which he passed.

Caitlin and Reuben Moore, Year 5, each played a French Horn solo which was followed by a duet from the talented brother and sister entitled London Bridge. 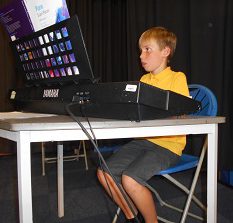 Sam Langford at the Keyboard

The concert closed with another performance by The School Choir who sang This Is Me. 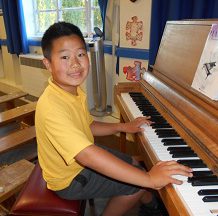 David Chen at the Piano

Mrs Kate Needs, Headteacher, thanked everyone for coming, expressed her thanks for the hard work of the peripatetic music teachers in preparing the pupils and congratulated all the children for their excellent performances. The audience showed their appreciation with long and loud applause. *