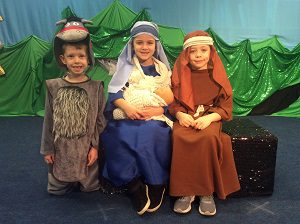 The school presented its Christmas show on Thursday, December 14th. Mrs Dyer, Headteacher, welcomed the audience and then the journey began. Those who were to take us on this journey were Hiker – Bailey, Pilot – Megan, Jockey – Bethany, Sailor – Ethan, Chauffeur – Nasma and Train Driver – Ali.

The first class to perform was Miss Fraser’s class. The boys sang Love Train. They were great movers mimicking the actions of a moving train. The girls then performed to Last Train to Memphis. The choreography was excellent and all the pupils appeared to be thoroughly enjoying their performance.

Mrs Rowland’s class entered to Walk 500 miles by the Proclaimers and sang and danced to Walking On Sunshine. Their bright yellow and white costumes were very appropriate for the words of the song. This was followed by pupils dressed in colourful, warm Christmas jumpers who sang and danced to Winter Wonderland.

The third class to perform was Miss Calnan’s who took the audience on a sea journey. The girls beautifully dressed as Hawaian dancers performed to How Far I’ll Go. They were followed on stage by pupils dressed as pirates who performed to Pirates of the Caribbean and who moved convincingly scanning the horizon for passing ships to board.

Next came Mrs Page’s and Mr Lake’s class who entered to Fly Me To The Moon. They performed to Happy Holiday, The BA Theme Tune and Flying the Flag. This was a very professional performance; the boys and girls were dressed as flight attendants and we heard over the imaginary plane’s intercom This is your captain speaking and other airline announcements.

Mr. Milner’s class followed performing to Driving in my Car as a large red cardboard car was placed on the stage. The boys and girls were dressed in caps, trousers and braces ready for their drive with boys playing guitars each side of the stage. Tinsel adorned and carrying tinsel wreaths the pupils then performed to Driving Home for Christmas.

The last class to perform was Mrs Colaco’s and Mrs Ghedia’s who entered in great costumes as jockeys on horses. They were followed by a reindeer and pupils carrying bells who performed to The Sleigh Ride. The six journeys had come to an end but the most important one was still to come.

A donkey entered bearing its heavy load – Mary – with Joseph walking beside. Their entrance was accompanied by the song It’s a long way on a dusty road. Baby Jesus was born in the stable (a doll wrapped in a blanket appeared). Angels entered followed by shepherds and finally the three kings. The whole cast – those on stage and other previous performers on benches (who turned to face the audience) – sang A Baby Boy was born for You and Me. They then wished everyone a Merry Christmas. As the pupils took their bows in pairs they were  loudly applauded by a very appreciative audience.

Mrs Dyer can be rightly proud of her pupils who performed with confidence. Congratulations must also go to the staff who prepared their classes for this delightfully entertaining Christmas Journey.* 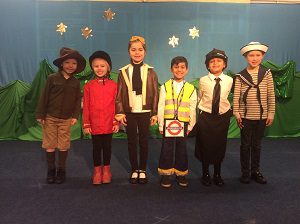 Pupils who took the audience on the Christmas Journey