You are here: Home › Primary › Education › Bishop Winnington-Ingram’s Young Musician of the Year 2018
By Sue Midgley on 6th July 2018 in Primary, Education 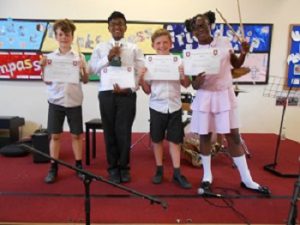 The competition consisted of four categories : Beginners, Advanced, Ensemble and Overall Winner. Drums and piano were the favoured instruments this year; however, there were two solos, one on the violin and the other on the clarinet as well as guitars in the ensembles. Each performer was introduced by Mrs Maria Fazaldin, Music Teacher. All the pupils played with confidence and enthusiasm, irrespective of their musical ability, which made for a very entertaining afternoon and some difficult decisions for the judges to make.

In the Beginners category there were sixteen competitors. At the end of their performances, so that the judges could have some time to deliberate, the pupils were entertained by a trio from Bishop Ramsey. They were singer, Katie Hall, Year 8 who was accompanied by Ted Britton (piano) and Kevin Suvorov-Undugoda (guitar), both Year 7 students. These students, accompanied by Miss Rottmann, had made a half hour’s walk from school on a very hot afternoon! The trio provided the audience with a delightful interlude. The winner of the Beginners was Harry on drums.

There were five competitors in the Advanced Category, all of a high standard. After lengthy discussion the judges decided on the winner who was Treasure. She gave a dynamic performance on drums which was greeted with loud applause from the audience. It was great to see a girl playing drums; Treasure has been playing drums since she was four years old and both her father and brother are drummers. At the end of the performances the pupils were entertained by two members of Louis Cowling’s band, The Great Flud ( which is the correct spelling!).

The final competitors were in the Ensemble category and the winners were Aaron and Evan on guitar and drums.

The category which is always eagerly awaited each year is Overall Winner, i.e. the school’s Young Musician of the Year. This year the title was awarded to Aaron who gave a stunning piano solo.

Mrs S Johnston, Deputy Headteacher, announced the winners and presented them with certificates and Aaron received the cup.

At the end of the afternoon, much to the delight of the pupils, everyone was entertained by a drum solo from Louis Cowling who has previously judged and played drums at this event. Louis is a former pupil of BWI and Bishop Ramsey and has just completed his first year at university. He also won Young Musician of the Year more than once when a pupil at BWI.

This was a fitting end to what was a very entertaining afternoon.