You are here: Home › Primary › Education › Bishop Winnington-Ingram’s Young Musician of the Year 2016
By Sue Midgley on 19th July 2016 in Primary, Education

On Friday, July 8th. BWI held their annual competition to reward the best musicians in several categories and choose the overall winner.

The first category was for Beginners who played a variety of instruments including piano, violin, drums and tenor horn. The next category was the Ensemble which included violins, recorders, ukuleles, drums and vocals. The Advanced musicians formed the final category with performances by pupils playing piano, clarinet, trumpet, drums and guitar.

After each category there was time for the judges – Year 12 music students from Bishop Ramsey School – to deliberate. There was also an opportunity for the pupils to hear performances from the secondary students. Following the first category Esme Porter (piano) and Frances Lay (violin) played Run by Leona Lewis. After the Ensembles, Esme played Carangueijo by the Brazilian composer, Heitor Villa-Lobos. Before the winners were announced there was an eagerly awaited drum recital by the talented Louis Cowling, whom the pupils remembered from last year, who played Waiting All Night by Ella Eyre. 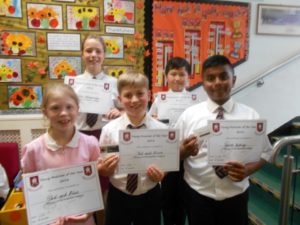 Winners of the Young Musician 2016 competition at BWI School

The winners (pictured) were then announced. They were : Ella Stanbridge (Beginner – piano), Ted and Alice (Ensemble – recorders), Aaron Rodrigo (Advanced – piano). The Overall Winner and Young Musician of the Year 2016 was Caleb Huang (piano) who also won the trophy last year. The category winners were presented with a certificate and a £10 Promusic gift voucher. Caleb received a certificate, a £25 voucher and the trophy on which his name will be engraved once again.

The afternoon concluded with a second performance from Louis of Girls Like by Tinie Tempah.

The competition was organised by Mrs Britton, the school’s music specialist, who introduced each competitor.*