On Wednesday, July 12th. the school presented its Year 6 Production of The Lion King to celebrate the pupils’ time at the school as they have now all moved on to local secondary schools.

The story begins in the Pride Lands where all the animals are gathered for the presentation ceremony of the young lion cub, Simba, who is the heir of King Mufasa. The production began with the whole cast and choir singing the opening song, The Circle of Life with great enthusiasm. All the songs were accompanied by a live band whose members have voluntarily supported the school’s concerts on many occasions. They were directed by Mrs. Britton, the school’s music teacher who played the piano. She left the school at the end of the summer term and will be greatly missed by the staff and pupils.

Each scene setting was highlighted by an appropriate slide projected on to the wall at the back of the stage which was particularly effective in creating atmosphere.

The audience was soon made aware that not everyone was delighted by the birth of Simba. His uncle, Scar, is jealous that his nephew will inherit the kingdom ahead of him and plots the  killing of the young cub. He sets about this task with the help of a group of hungry hyenas. Unfortunately in the process King Mufasa is killed trying to save his son. Scar convinces Simba that he was responsible for his father’s death. Simba remains in exile in the jungle.

However, like all good stories, this one has a happy ending. Eventually Simba returns to the Pride lands to claim the throne. He marries his faithful friend, Nala, and has a son, so The Circle of Life continues. At the end of the performance the whole of Year 6 sang Goodbye My Friend which was quite emotional for many of the pupils and brought tears to the eyes of several mums in the audience. 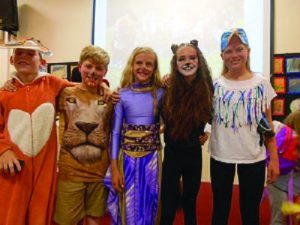 Castmembers of The Lion King 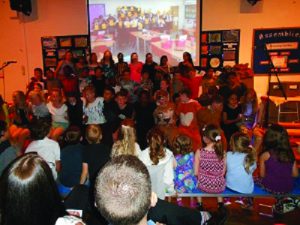 All the pupils played their parts with great confidence, but there were some notable performances which deserve a special mention. These were from Ted Britton (Simba), Kayla Van Zyl  (Uncle Scar),Georgia Astle (Nala), Jayden Stewart (Rafiki) and Poppy Lowe (Zazu). There was also a brilliantly funny rendition of the song Hakuna Matata by Luca Kernot (Timon) and Ellis Heffer (Pumbaa), the meerkat and warthog who befriend Simba while he is in exile and teach him the ways of the jungle.

This very entertaining production will be remembered fondly by the pupils when they think of their primary school.*