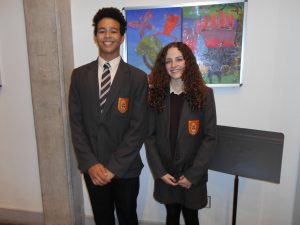 Dr. Hilary Macaulay, the school’s new Executive Headteacher, gave the opening address. She spoke of the process of handover from one headteacher to another and spoke of the Christian ethos of the school which underpins far more than preparing students for exams. Dr Macaulay praised the staff for all their work during the difficult past eighteen months of Covid-19 for continuing to provide a high standard of education for all students; three students secured places at Cambridge University. She then addressed the prize winners by saying: “You are in charge of your destiny.” She also stressed the importance of the support students received from parents and carers throughout the pandemic.

The Guest of Honour was Mr Andrew Wilcock, the school’s previous Headteacher, who then presented the prizes. There were Form Prizes in each of the year groups and subject prizes. Each winner was introduced by a Year or Faculty Head and the audience was informed why the student had deserved the prize. 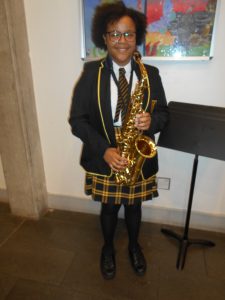 Some of the notable winners were Maia Adolphus, who not only won the Music prize but gave a very professional solo  saxaphone performance of the Ist Movement from Sonata by Gary Schocker later in the evening. Maia is also a member of the school’s Jazz Band. The prize for Physical Education was won by Chloe Sawney who is a key member of the school’s netball team. The John Cule prize for Drama was awarded to Grace Hammond. The prize is named after the school’s first Headteacher who took an active role in the school’s dramatic and public speaking events. The school also awards prizes for achievements other than those for academic prowess. The Amy Walker prize for commitment to the community and independent spirit was won by Daniel Bisland for his effort in raising money for charity. This prize was named in the memory of a Year 7 student who passed away during the 1997/8 academic year. Finally the Jacob Sawyerr prize for Courage and Determination was awarded to Filip Plechowlak who 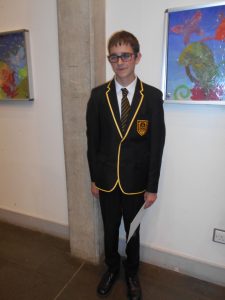 continues to do well in his studies despite being visually impaired. This prize is named after the student who suffered a brain haemorrhage whilst playing football in 2014.

Following the presentation of prizes there was a performance of “Over the Rainbow” by the Canterbury Choir with the String Ensemble.

This was followed by the address from the Guest of Honour, Mr Wilcock. He first spoke of the difficult journey the school had experienced with Covid-19 which meant that last year’s Prize Giving had to be a virtual one. He also praised the teachers and the leadership team for providing good quality online learning for all students. Mr Wilcock then produced a large umbrella which he endeavoured to balance on the palm of his hand – with little success. He then asked for a volunteer from the prize winners who believed they could have more success. Charlie  Bown stepped up but had little success. Nick Gettens then volunteered and executed an excellent balancing act whilst looking up in the air. Mr Wilcock had noticed this and commented: “If you want to achieve your aim you have to look up.” He then went on to say when asked “What do you want?” it’s easy to give the wrong answer. Fullness of life is important. School can only give you so much. Now, who do you want to be?  His inspiring speech was met with warm applause.

After Mr Wilcock’s address a vote of thanks was given by Ethan and Kayla and he was presented with a gift – possibly a favourite beverage! The evening ended with the singing of the hymn “Lord of all Hopefulness” and the final blessing from the Chaplain, Rev Susy Dand.