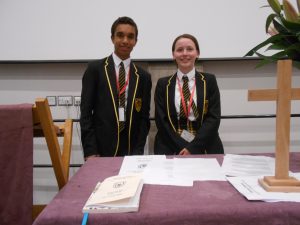 Following the singing of the opening hymn, In Christ Alone, the school’s Executive Head, Dr Hilary Macaulay, addressed the audience. She spoke of her pleasure that the school could once again hold the prize giving following the event’s previous absence due to the Covid 19 pandemic. She reiterated that the purpose of the school was much more than just preparing students for exams but developing the whole person, one who puts service before self. She also mentioned planned  overseas trips to America and Poland for next year. There had been a democratic process in choosing the Head Students and collaboration with several local schools including Bishop Winnington-Ingram Primary and a primary school in Harrow. Dr Macaulay said that all the students receiving prizes had shown exceptional commitment and achievement.

Prizes were then presented for the Academic Year 2021-22 by Rev,d Ann Lynes. Prizes were awarded to the high achievers in every form group from Year 7 to 10. Individual subject prizes were also awarded for significant achievement in curriculum subjects and Work Experience. The winners were each introduced by members of staff who gave a resume of their special qualities which led to them being nominated for the prize.

As well as subject prizes there were also those awarded to students in the Special Prizes category which included the Jack Hughes Literacy Prize (named after a past teacher of English and Deputy Head of Lower School who tragically died in 1984) which was awarded to Priscilla Oei, Year 10, for supporting the school library. Miss Elaine Neal, the school librarian, praised Priscilla’s work as a student librarian and mentioned that she had done her work experience at Brunel University’s library. The Amy Walker prize for commitment to the community and independent spirit (named in memory of a Year 7 student who sadly died during the 1997/98 academic year) was awarded to William Birch, year 7. The Jacob Sawyerr prize for courage and determination (named after a student who suffered a brain haemorrhage whilst playing football in 2014) was awarded to Nadira Roberts, Year 7, who had raised money for the Solidarity Sunflower Campaign to help children in Ukraine.

All the prize winners are to be congratulated for their achievements but a special mention goes to Charlie Cadman  who won the prize for Physical Education Years 7-10. Charlie plays hockey for London who won the South Counties Championship and he also took part in the London Vitality 10Km Run and he came 18th out of 1,132 competitors!

Rev’d Ann Lynes began her address by saying that in the past she could not have imagined that she would in future be speaking as she was at the prize giving. She told of her experience as a high school student who had to speak in assembly. When her turn came she could not find what she had to say so in a panic kept turning pages back and forth until the headteacher came to her aid. This recounting of a past incident which the audience found amusing was used to illustrate a more profound message. How things change over time. Rev’d Lynes reflected on the changes she had seen in her life time. For example, in the past women could not be ordained to the priesthood. She stated that she had benefitted from the work of others who had gone before her. However, she affirmed that there are still further battles to be fought in the present to totally eradicate racism, sexism and homophobia from today’s society. Looking at the assembled prize winners she said: I see wonderful potential in front of me” and then put a question to the students: What would you like to achieve for the future generation?” Her address was ideally pitched to her student audience and was met with appreciative applause.

A vote of thanks was given by Charlie Cadman and Georgia Bishop who presented Rev’d Lynes with a gift.

There followed a final hymn and Blessing by Rev Susy Dand, Chaplain.