The school held its annual St Cecilia Concert on Thursday, November 21st before a large audience in the school hall. The engaging host for the evening was Pip Stock who introduced the performances with his own brand of humour appreciated by the audience. 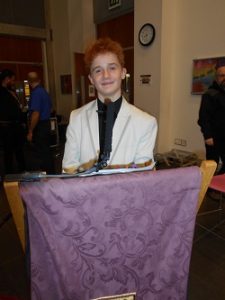 The programme began with a performance of Tchaikovsky’s Dance of the Sugar Plum Fairy by the Bishop Ramsey Orchestra. This was followed by two Year 7 students, Maisie A and Tiffany S who performed Shallow (Lady Gaga). The next performance was Haydn’s Oboe Sonata Nr.3 in F by Alana Lynch. The Canterbury Choir then sang The Gospel Truth. Travis Cross gave a rousing performance of his Bang the Drum which as followed by Fast Car performed by Tess Harris, James Hodgkinson and Elena Manchorova.

During the evening there were two excellent brass performances by Maia Adolphus. One of the highlights of the evening was Katie Hall’s performance of the moving song Still Hurting. Katie has the ability to convey all the emotion of the lyrics – she lives the words; the audience would surely have agreed with Pip’s comment at the end of her performance which was simply, “beautiful”. Another memorable performance was that of the Musical Theatre Juniors who gave a lively performance of Believer. Later there was a delightful performance by the Musical Theatre Seniors with their rendition of Bruce from the popular musical Mathilda. Congratulations to the students responsible for the original choreography which was most entertaining.

Later there were further performances by the Canterbury Choir and the Bishop Ramsey Orchestra. Another charming interlude was given by a talented duo, Ethan Francis (guitar) and Elizabeth Viala (vocal) who performed 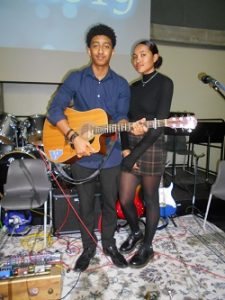 some of their own songs. Another very accomplished group was undoubtedly the four boys and two girls of the Jazz Band who certainly got feet tapping in the audience with their very professional performance of Chameleon and later Stevi Wonder’s Sir Duke.

Towards the end of the concert Daniel Greene and Zeidan Noah, playing drums and electric guitar, performed Seven Nation Army and Beatriz Lopes gave a melodious performance of I Love You. The concert ended with a great performance by Bishop Ramsey Orchestra and the Canterbury Choir of Amazing Grace.

Once again performers from all year groups provided the audience with a very by entertaining evening. They were congratulated by Mr M Britton, Deputy Head of School, who also paid tribute to the hard work and commitment of Miss Rottmann who for some time has been the only member of the music department. She was also thanked by Pip and presented with a bouquet.

The audience was finally treated to an encore by Elizabeth and Ethan who performed In The Clouds whose lyrics and accompaniment they composed.