The school held its St Cecilia Concert on Thursday, November 25th. Due to the Covid-19 pandemic it had been impossible to hold what has always been an annual event for some time and the audience eagerly awaited the concert’s opening performance.

The audience was welcomed by Mr Britton, the Deputy Head, who introduced the evening’s host Pip Stock, a Year 13 student who has appeared in many shows throughout his years at Bishop Ramsey and who brings his own brand of humour to the proceedings. 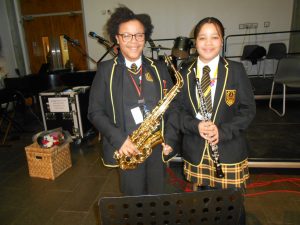 Next on the programme was a vocal solo: The Night We Met performed by Olivia Kanaan, Year 10, who was accompanied on the guitar by Mr Swanepoel. Olivia’s performance was followed by Canterbury Choir’s rendition of the soulful traditional spiritual Wade in the Water. The Choir is made up of students from all year groups in the school.

Maia Adolphus, Year 10, the sister of Malia, next delighted the audience with a very accomplished solo saxophone performance of J.S. Bach’s Minuet 1 & 2 from Cello Suite 1. The programme then featured a fun performance of the number When I Grow Up from the musical Matilda by the Musical Theatre Club which was warmly applauded by the audience.

The penultimate item was a piano solo by Alexander Williams, Year 12, who gave a beautifully professional performance of Jingo No.3 from Rock Preludes by Christopher Norton. The Concert ended with a rousing performance by Bishop Ramsey Orchestra of Symphony in G Major-Allegro by Le Chevalier de Saint-Georges. 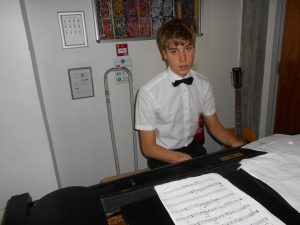 After appreciative applause for all the performers the school’s Executive Head, Dr Hilary Macaulay, expressed her thanks to all concerned who had worked to put on the concert. She explained that due to the pandemic students had not been able to meet together for a long time to prepare for group musical items and that many of them were performing in public for the first time. She particularly thanked Mr Swanepoel, who in the absence of Mrs Bowden, Head of Music, who is on maternity leave, who with the help of other staff in the Department had made the concert possible.