The school held this annual event on Thursday, June 13th in the school hall. Maddie Carr, Year 10, welcomed everyone and then followed the presentation of prizes for the academic year 2018-19 by the Guest of Honour, Mr Wayne Dixon from Christian Connections in Schools.

The year prizes were interspersed with prizes for all the subject faculties. Each recipient was introduced by the Head of Year/Faculty who explained why the individual students had been chosen.This part of the proceedings ended with the usual presentation of Special prizes. These included prizes for the most house points during the year, for supporting the library, for commitment to the community and independent spirit, for courage and determination, for improvement and the Chaplaincy prize. Two of these prizes are named after past students: Amy Walker who sadly died during the 1997/98 academic year ( this year’s recipient was Pip Stock, Year 10) 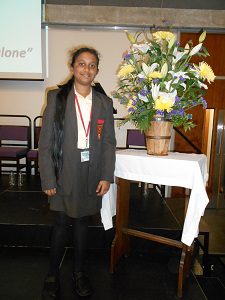 Gabby Arasaratnam who won the prize for the most House Points. 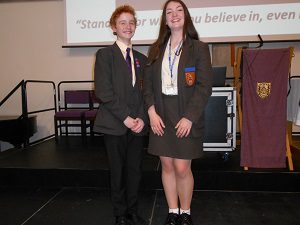 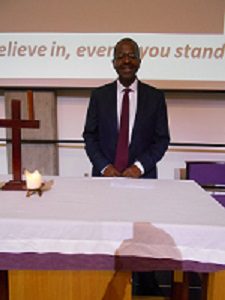 and Jacob Sawyerr who demonstrated amazing courage and determination following a devastating brain haemorrhage in 2014. This prize was won this year by Jess Phllips, Year 10.

Mateusz Wasiel, Year 10, then introduced the first musical item of the evening which featured Annabel Goodliffe , Year 10, who sang Someone You Loved by Lewis Capaldi.

The highlight of the evening was undoubtedly the address by Mr Wayne Dixon which was inspiring, humorous and meaningful and engaged with his young audience. Early in his speech he spoke of attending a school parents’ evening with his mother who was told: ” Wayne works hard and talks too much!”  He then advised the students to work hard but don’t be too disruptive!  The key message to the young people was to make the most of the opportunities they have in their school; to appreciate how lucky they were , unlike numerous young people around the world who do not have access to education or even clean water! He went on to say that success was down to a team effort – a partnership between parents, pupils, professionals. His address was warmly applauded.

The second musical item was presented by Katie Hall, Year 9, who received the Music prize. She sang Pulled by Andrew Lippa from The Addams Family Musical in which she will be performing in the last week of term.

Mrs N Adamson, Head of School, then gave her annual report which was followed by a Special Presentation to Mrs Catherine Dann for her many years of dedicated service to the school’s governing body. The evening came to a close with the singing of the hymn How Great Thou Art and a final blessing.