On Thursday, March 8th the school held its Spring Concert which was a further opportunity to showcase the performances of its talented musicians. The host for the evening was Amie Sullivan, Year 12 , who has performed this role at previous concerts. 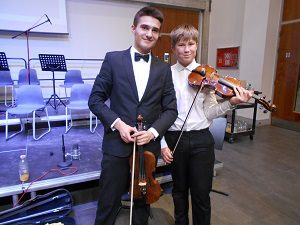 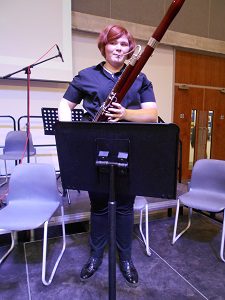 The concert was opened with a virtuoso piano solo by Andrei Anghel who played Ballade 1. Op.23 by Frédéric Chopin. Andrei also played violin in the orchestra. This was followed by the Junior Choir who sang Your Song by Bernie Taupin and Elton John. Next on the programme was the Bishop Ramsey Orchestra, conducted by Miss Jankauskaite, Head of Music, who played In the Hall of the Mountain King by Edvard Grieg. This was an ambitious choice for young musicians but every member of the orchestra played like a professional; it was a fantastic performance which was greatly appreciated by the audience.

The Jazz Band then gave a rousing performance of Take Five by Paul Desmond. A delightful flute solo by Lianne Ho, Year 12, was next. She played Tambourin by Gossec. Afterwards the Senior Choir gave an emotional performance of Tell Me It’s Not True from the musical Blood Brothers by Willy Russell which was followed by the Junior Rock Band’s performance of Vibe – Centuries by Fall Out Boy. Sophie Philbrook, Year 13, played the bassoon solo Lucy Long by Fred Godfrey. Sophie, a versatile musician, has been performing in concerts for many years and sadly this will be her final concert. Next came Canterbury Form Choir conducted by Miss Rottmann. They sang Castle on the Hill / Mr Brightside originally by Ed Sheeran. The first duet of the evening followed and was performed by Andrei Anghel & Aleksandr Ostyak, Year 9, who played Canon Inversus by Wolfgang Amadeus Mozart on their violins. The final performances of the first half of the concert were Spring – from The Four Seasons by Antonio Vivaldi played by the orchestra and the Musical Theatre Club’s spirited performance of Omygosh You Guys by O’Keefe & Benjamin. 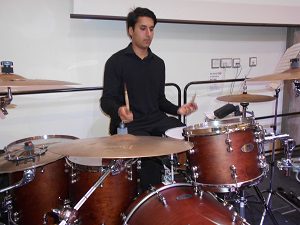 The first performance of the second half of the programme was a piano solo by Lianne Ho who played Nocturne in E Flat Major Op.9,No 2 by Frédéric Chopin. This was followed by performances by the Junior Choir and the Student Concert Band conducted by Sophie Philbrook. Next was a strong solo vocal performance by Harmoni Swaby, Year 10, who sang Read all about it by Emile Sandé. Something a little different followed – a Jazz Duo with Ruben Logan, Year 12, on drums and Miss Rottmann at the piano who gave a jazz version based on Für Elise by Ludvig van Beethoven which included a fantastic solo performance by Ruben. Further performances followed by the Junior Rock Band, Senior Choir and Student Concert Band. The penultimate item was a lively performance of Do-Re-Me, from The Sound of Music by Richard Rodgers & Oscar Hammerstein II, by the School Production Cast. The school will be putting on this musical later in the year. The final item of the concert was a beautiful performance of Joseph Haydn’s Minuet from The Surprise Symphony by the Bishop Ramsey Orchestra.

The concert was a great combination of different styles of music and was thoroughly entertaining. It was credit to the hard work of all the students involved, Miss Jankauskaite and Miss Rottmann.*